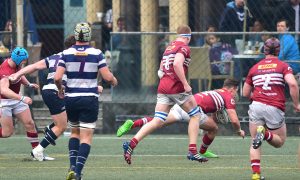 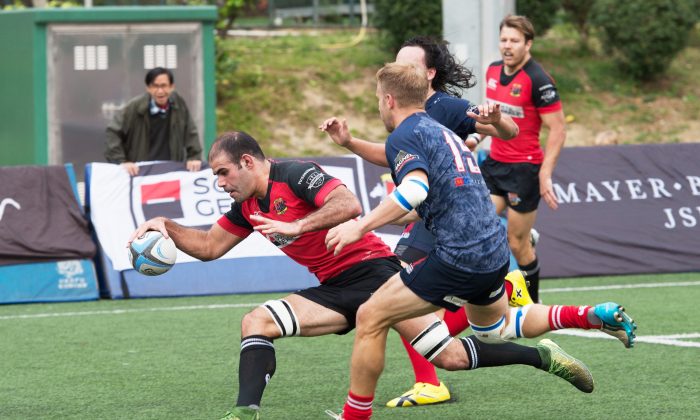 After forcing his way through tackles by Alessandro Nardoni and Jack Parfit of Hong Kong Scottish in a 20 metre run, an inspired Thomas Lomboley runs for the line to score his first of 2 tries for Valley in their Grand Championship Semifinal at Valley on Saturday March 5. (Bill Cox/Epoch Times)
HK Rugby Union

HONG KONG—The Hong Kong Grand Championship semi-finals on Saturday March 5 provided two contrasting games, but with a familiar outcome. Next week’s final, for the fourth year in a row, will be between Societe Generale Valley and Leighton Asia Hong Kong Cricket Club.

The first semi-final was between Cricket Club and Kowloon at the Aberdeen Sports Ground. Kowloon began strongly and took an early 0-7 lead, with a try by number eight, Rory Martin-Smith, converted by flyhalf Jack Neville. Despite Cricket Club dominance in the first half, Neville added two more penalties, with Cricket Club scoring at the very end of the half by centre Alex McQueen. The halftime score 5-13 to underdogs Kowloon.

In the second half, Cricket Club continued to pressure Kowloon. They added to the scoreboard, with tries by number eight Marcus Slade and flyhalf Makesi Stowers, with the latter converted by McQueen. This gave Cricket Club the lead 17-13 with 20minutes left. But Kowloon responded, pressured Cricket Club, and was rewarded with a try to Neville, and he later added a penalty. 17-21 to Kowloon with 10minutes left to play, and an upset seemed possible.

Any romantic notions of a surprise victory for a less fancied side were duly squashed with 2minutes left, when a well-worked break by Cricket Club winger Rowan Varty, put Matt Wyatt clear to score in the corner, giving the Cricketers a 22-21 lead. The conversion was missed, and despite Kowloon valiantly trying to regain the lead, the final score was 22-21, giving Cricket Club victory and a place in the final.

All credit to Kowloon, who have improved in leaps and bounds in the latter half of the season, and will be understandably sore that they did not secure an upset victory. Ironically, it was their second one point loss to Cricket Club within a month. This one hurt.

In the second semi-final in Happy Valley, there was none of the drama from Aberdeen. Valley steamrollered Scottish scoring seven tries to one. The match was sown-up after only 25minutes. It took nearly 30minutes before Scottish reached the Valley 22, and by then they were trailing 24-0. Valley had scored a penalty from the reliable boot of flyhalf Ben Rimene, and three unanswered tries. The first by scrumhalf Adam Rolston, after the Valley pack had pushed Scottish over the tryline; the second from a 20metre barreling run by prop Leon Wei Hon Sum, and the third, after a fine individual effort by number eight Thomas Lamboley. All converted by Rimene.

Valley controlled the match, aided more by Scottish indiscipline and frailty in the tackle, with sparks of individual excellence from key Valley players.

By half time, Valley had extended their lead to 36-0, with another try from Lamboley, and one from centre Tiger Bax. Rimene converted one, and missed one.

The second half was processional for Valley, who subbed early to rest players ahead of the final. They added two more tries; the first scored by flanker Toby Venn, and second by substitute centre, Ally Maclay. The latter was a fine team effort, from a counter attack, clinically finished by Maclay. Both tries were converted by Rimene. The score with 20minutes to play was 50-0 to Valley.

Scottish gamely stuck to their task of at least getting on the scoreboard, and were duly rewarded once Valley were down to 14, with Bax sin-binned, and their impressive young scrumhalf Thomas Coebrough squeezed over for a try at the whistle, converted by fullback Ben Tyler. Final score 50-7 to Valley: a comprehensive victory for Valley, with some consolation for Scottish.

For Scottish it was a match too far this season, with injuries and tight games having taken their toll, they seemed off the pace and slack in the tackle during the match, and also gave away far too many penalties and could not get any continuity in their play until the final 10 minutes, when the match was all but over. For Valley despite the margin of victory, they will want to improve and sharpen some of the basics, and speed the pace of play and movement of the ball, before facing Cricket Club next week.