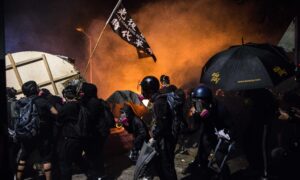 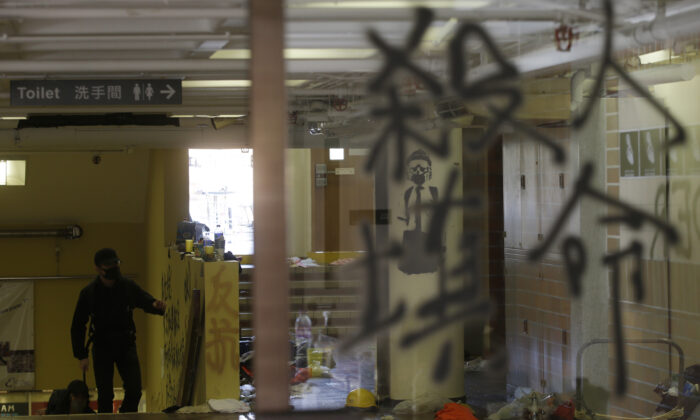 Protesters walk inside the campus of Hong Kong Polytechnic University in Hong Kong, China on Nov. 22, 2019. Most of the protesters who took over the university last week have left, but an unknown number have remained inside for days, hoping somehow to avoid arrest. (Achmad Ibrahim/AP)
HK Current Affairs

HONG KONG—A Hong Kong court on Nov. 22 suspended its decision to strike down a government ban on wearing face masks at protests, allowing police to enforce the decree for another week around keenly contested local elections in the city.

The court had ruled on Monday that the ban, imposed in October under rarely used emergency powers to prevent pro-democracy protesters from hiding their identity, infringed on fundamental rights more than was reasonably necessary.

The government had appealed for a freeze on the ruling while it appeals to higher courts.

The High Court agreed on Friday to grant a one-week suspension in view of the “highly exceptional circumstances that Hong Kong is currently facing,” local broadcaster RTHK reported. China’s rubber-stamp legislature rebuked the court ruling this week, in what some interpreted as an indication it might overrule the verdict.

Many Hong Kong protesters have defied the ban, and during lunchtime rallies on Friday, some chanted “We have the right to wear masks.”

The city’s new police commissioner, Tang Ping-keung, told reporters police would be out in force at polling stations on Sunday to respond to any outbreak of violence “without hesitation.”

Six masked protesters surrendered before dawn on Friday, bringing to about 30 the number that have come out in the past day from a university campus surrounded by police.

The group emerged from a campus entrance and held hands as they walked toward a checkpoint around 3 a.m. Five wore the black clothing favored by the protest movement and the other was in a blue checked shirt.

Most of the protesters who took over Hong Kong Polytechnic University last week have left, but an unknown number have remained inside for days, hoping somehow to avoid arrest.

Tang Chun-Keung, head of the Hong Kong Association of the Heads of Secondary Schools, said the holdouts include minors, numbering less than 10. Tang entered the campus on Friday with some others but failed to find them.

“We have lawyers and social workers ready to provide assistance and we hope to persuade them to leave the campus. We are worried our work is getting more and more difficult because students are refusing to meet us,” he told reporters.

Police chief Tang reiterated that those under 18 can leave, although they may face charges later, and pledged impartial treatment for all adults facing arrest.

He also said the police didn’t set any deadline to end the siege.

Pro-democracy protesters battled with police and blocked the nearby approach to a major road tunnel, which remains closed. It was the latest bout in more than five months of unrest. Protesters are demanding fully democratic elections and an investigation into alleged police brutality in suppressing the demonstrations.

Pro-democracy rallies were held sporadically in the past two days. Riot police broke up minor scuffles between protesters and pro-Beijing supporters at a downtown bridge on Friday, but there were no major clashes ahead of Sunday’s district council elections.

City leaders have said they want to go ahead with the vote, seen as a bellwether of public support for the protests, but warned violence could make it impossible to hold a fair and safe election.

By Eileen Ng and Ken Moritsugu