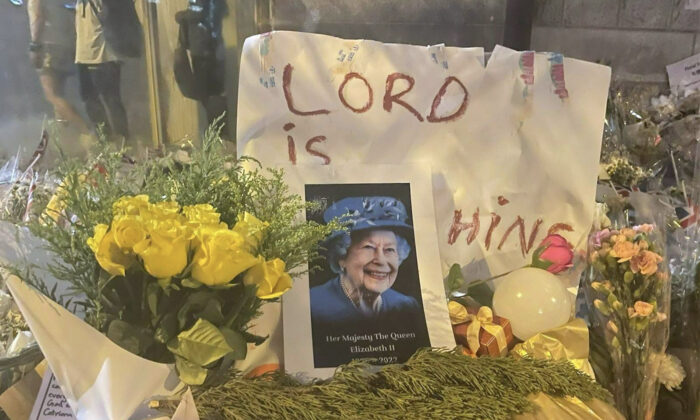 Many HongKongers were deeply saddened by the death of Queen Elizabeth II. On Sept. 12, 2022, the last day of the Mid-Autumn Festival holiday, a hot weather warning was issued by the Hong Kong Observatory. Despite the scorching heat, thousands went to the British Consulate General in Hong Kong to sign a book of condolence and leave flower bouquets.

Starting at noon, citizens lined up outside the British Consulate in Admiralty and a huge bed of ​​flowers and images of the queen slowly built up on the consulate walls. At one point, there were more than 500 people in the queue that extended to the Cotton Tree Drive Fire Station. The long queue did not subside until dusk.

Mr. Cheng and his wife, both born in the 90s, told reporters that they witnessed the Queen’s charm when they were still very young. “In retrospect, we all felt her genuine sincerity towards HK, and that created a good impression on all of us,” he said.

Cheng believes that the Queen was graceful and kind, and she treated both British nationals and Hong Kong people with equal kindness.

Queen Elizabeth II twice visited Hong Kong (1975 and 1986) when the city was still a British colony.  Her majesty was seen as likeable by people from all walks of life. Hong Kong citizenry say she left a great impression on them.

After the implementation of the National Security Law (NSL), demonstrations and rallies disappeared completely.  Freedom of speech and expression were severely restricted thereafter.

It is no wonder that the Queen’s death became an opportunity for people to reminisce about the days of Hong Kong under British rule.

Mr. Ng told reporters that he respects the Queen very much and believes that she contributed a lot to Hong Kong and its people. He said that his parents were able to witness the Queen’s charm and elegance in person, but he himself was not so lucky. “To queue for over four hours under the sun, it’s still worth the wait.”