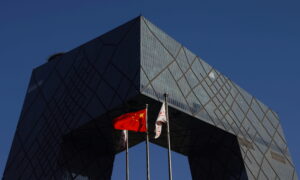 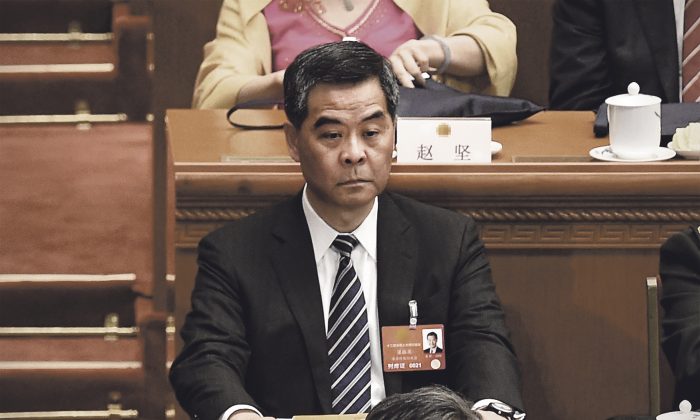 Leung Chun-ying attends the opening ceremony of the National People's Congress at the Great Hall of the People in Beijing on March 5, 2016. (Wang Zhao/AFP/Getty Images)
China

To Hong Kong’s politicians and business people, the political Two Sessions held every year in China are a channel for gathering information. Evaluation of Hong Kong Chief Executive Leung Chun-ying’s performance and whether he will be re-elected have become the spotlight.

Different signs and hints during the Two Sessions have indicated that Leung is not in favour.

The Mongkok incident, a clash between protesters and police that happened on the first day of the Chinese New Year, was a major concern during the Two Sessions among Hong Kong people. Leung labelled the incident a “riot,” and Zhang Xiaoming, director of the Liaison Office in Hong Kong, described the incident as something akin to Hong Kong independence.

However, much to everyone’s surprise, the incident received little attention during the Two Sessions.

On the other hand, a few Hong Kong deputies who attended the National People’s Congress (NPC) of Hong Kong said that Zhang Dejiang, the top official responsible for Hong Kong and Macau affairs, did not censure the incident. Instead, he urged that the incident not be turned into a political issue, and he said, “Hong Kong issues are nothing.”

However, on the same day after meeting Zhang, Leung told reporters that Zhang was “shocked” and “upset” about the violent acts of the rioters and that the incident had undermined the law system and Hong Kong’s image. There are two different versions of Zhang’s words.

Leung said they had not discussed his re-election. When asked if that meant the central government was not supportive, he said that Zhang “recognized the work he and his government had done.”

However, Xinhua News Agency, the regimes mouthpiece, only reported that Zhang had met the deputies from Hong Kong. There was no mention of Zhang meeting Leung at all.

Last July, Leung made a trip to Beijing after his electoral reform proposal was rejected by the Hong Kong Legislative Council (LegCo). He also claimed then that his performance was “fully recognized” by Zhang. Again, there was no report by Xinhua News on Zhang having met Leung.

“Hong Kong is important,” he said. “We are concerned about maintaining prosperity and stability in Hong Kong. Victoria Harbour is the world’s most beautiful harbour. Hong Kong has our full support.”

Yang is a professional diplomat. His rare presence at the meeting showed that Chinese Communist Party leader Xi Jinping is unhappy with the Jiang faction’s clout in the Hong Kong and Macau Affairs Office and hopes Hong Kong can continue to enjoy financial advantages in the world. The Jiang faction is composed of the supporters of former Party leader Jiang Zemin.

As a chairman committee member, he was not seen at the opening of the NPC. When Zhang Dejiang attended the NPC Macau meeting, he was also absent. It was rumoured that he might have been replaced.

Chen Sixi, the Liaison Office vice director, claimed that Li was unwell and was advised by the doctor to rest. There was no mention of whether Li would attend all future meetings.

Li Qiufang, the team leader of the Central Commission for Discipline Inspection (CCDI) who was stationed in the Hong Kong and Macau Affairs Office, said on March 8 at the Two Sessions that she was still investigating whether there was corruption in the Liaison Offices and that the CCDI would cover every department and section.

Since Li Gang became the deputy director of the Liaison Office in Hong Kong in 2003, he has been closely associated with Leung.

The day after Leung was elected Chief Executive of Hong Kong, he went to the Liaison Office to thank then-directors Peng Qinghua and Li Gang for their support. Li was deployed to Macau at the end of the same year.

No mention of Leung’s second term

Wang Guangya, ex-director of Beijing’s Hong Kong and Macau Affairs Office, who once asked Leung to do some reflection, was asked by Hong Kong media during the Two Sessions whether he was happy with Leung’s performance. Wang shunned the question.

“I guess he is doing his best. Different people in Hong Kong judge him differently,” he said.

When asked if he was supportive of Leung seeking a second term, he said it was too early to talk about the candidate for the next Chief Executive.

According to analysts, Leung’s popularity has been at rock bottom, and there have been non-stop calls for him to resign.

During the Two Sessions, the pro-Beijing camp in Hong Kong called for him to resign. Chan Yuen-han, a member of the LegCo and a trade unionist, said during an interview that Leung was self-opinionated and that she had no answer as to whether she would support Leung to seek a second term.

James Tien Pei-chun, honorary leader of the Liberal Party, said Leung would undermine the “one country, two systems” policy if he was given a second term.

Analyst Lai Chak-fun believed that during the Two Sessions, the high officials in Beijing did not show Leung any support.

“The three requirements of a Chief Executive are that he must be someone whom the central government trusts, win support from all walks of life, and have the ability to rule. It is quite obvious that Leung does not meet the last two requirements,” Lai said.

He said that after the LegCo election in September and after the personnel of the 19th NPC is decided on, Leung’s future will be clear.

He also said that it is common knowledge that China’s economy is facing serious problems. Beijing is trying to use Hong Kong to stop China’s economy from slipping further.

It is therefore important to maintain stability and prosperity in Hong Kong. However, ever since Leung, spokesman of the Jiang faction in Hong Kong, assumed office, he has been following the instructions of Jiang’s high-ranking supporter Zeng Qinghong to create unrest in Hong Kong. That was how the Mongkok incident broke out.

At the Two Sessions last year, there was a quest for the internal security to be applied to Hong Kong on the pretext that there were people calling for Hong Kong independence. Such voices were not heard in the Two Sessions this year.