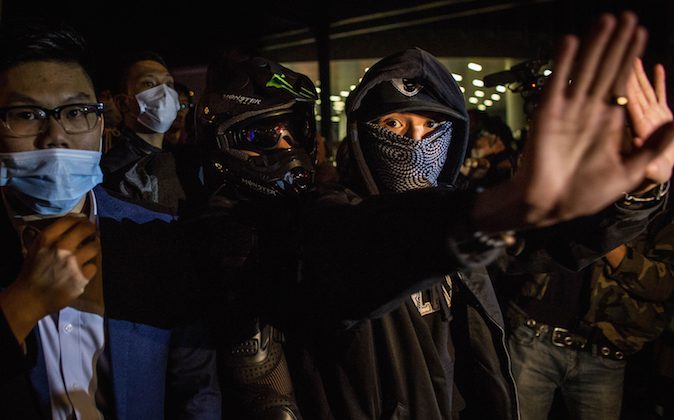 A pro-democracy activists shields himself from a light as he faces off with police outside the Legislative Council building on November 19, 2014 in Hong Kong. (Chris McGrath/Getty Images)
China

HONG KONG—A small group of unidentified young men rammed a metal barricade through a large glass door at the Legislative Council offices in the early hours of Wednesday morning, several of them running inside the building soon afterwards.

An attempt to stop the episode by a pro-democracy member of the LegCo, Fernando Cheung, was unsuccessful. Videos show him attempting to insert himself between the barricade and the door, but he was pulled away, and the ramming continued until the glass fell.

Police were conspicuously absent as all this went on, arriving after the door was smashed. After the police did arrive, they used their batons and pepper spray to subdue the crowd during multiple scuffles around the LegCo door, before and after they arrested two protesters.

The incident took place after 12:00 a.m. local time (1:00 a.m. Hong Kong time), and is the most significant escalation of the protests so far. Until now, no individuals claiming to represent the pro-democracy students and their supporters have engaged in vandalism of government property, and the protesters have generally prided themselves on their orderliness and commitment to nonviolence.

Hong Kong publication Ming Pao reports that these radical protesters called themselves “netizens,” and they had earlier tried to stir up trouble in Admiralty.

At about 10:45 a.m. (11:45 p.m. HKT) on Nov. 17, around ten of them demanded access to the main speaking stage to recruit supporters for their assault on the LegCo building.

Occupy marshals insisted that the “netizens” removed their masks before speaking at the microphone, but they refused, and instead used their megaphone to promote their cause.

The masked “netizens” later called the Occupy marshals “hypocrites,” likened them to the Hong Kong police force, and tried to tear down the main stage. However, after realizing that media personnel were training their cameras on them, the “netizens” quickly stopped and moved on.

With an absence of reliable information about what prompted the LegCo attack, theories proliferated online. One said that it was organized by the popular online forum HKGolden, though the posts there do not talk explicitly about smashing windows and entering the LegCo.

Another explanation suggested that the attack was driven by the mistaken claim that the LegCo was to vote on an amendment to Article 23, a bill that would curb online freedom,during the scheduled LegCo meeting on Nov. 19.

According to a RTHK report, Hong Kong Federation of Students secretary general Alex Chow commented at about 8:00 a.m. Hong Kong time that the instigators gave misleading information about Article 23, which would only be discussed in 2015. Chow also said that it was regrettable that those who broke the glass door immediately fled the scene.

Likewise, prominent student leader Joshua Wong said he couldn’t understand why the offenders ran away, and added that citizens carrying out civil disobedience have to be responsible for their actions.

When asked by reporters if the LegCo attack would hurt the Occupy movement, Wong said that he disagreed, and that “the Hong Kong government has to take responsibility for all actions to date.”

The incident has provoked deep divisions among protesters, given how out of step it is with the movement thus far, and the almost certainly negative repercussions it is likely to have as the news is proliferated among the general public.

“I doubt the real background of some of these protesters,” writes Kitty Chan, a supporter of the movement,on Facebook. “I don’t like it… Mainstream/Pro-BJ media are going to have a field day tmrw.”

For more, see the live blog, below.