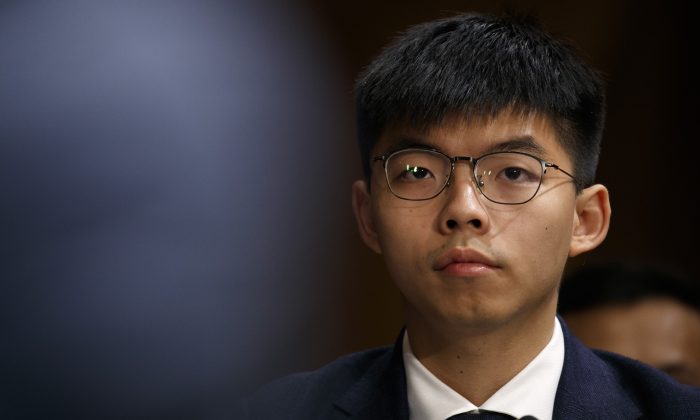 Hong Kong pro-democracy activists on Sept. 17 urged U.S. lawmakers to pass legislation that would counter Beijing’s abuses in the city—in support of continuing protests against the Chinese regime’s growing encroachment.

Joshua Wong, secretary-general of Hong Kong’s Demosisto party, told a hearing of the Congressional-Executive Commission on China (CECC) that the Chinese regime shouldn’t be allowed to enjoy the benefits of Hong Kong’s special trading status, while eroding “our freedom.”

“Beijing should not have it both ways,” Wong said.

The global financial hub serves as a major conduit for foreign investment into China. The United States grants Hong Kong special privileges not granted to the mainland, which have, in part, allowed such investments to continue, despite the territory reverting to Chinese rule from British administration in 1997.

For more than three months, Hong Kong has been embroiled in mass protests that began in opposition to a now-withdrawn extradition bill, but have since evolved into wider calls for democracy. The extradition bill would have allowed people in Hong Kong to be transferred to the mainland for trial in courts controlled by the Chinese Communist Party.

Protesters say that the recent unrest is a culmination of years of frustration at the Chinese regime’s escalating interference in the city’s affairs, despite a promise of autonomy after the handover of sovereignty.

Under the formula of “one country, two systems,” the Chinese regime promised to allow Hong Kong autonomy and freedoms that include an independent judiciary.

“We are approaching dangerously close to one country, one system,” said Wong, who first rose to prominence as a student leader during the 2014 Umbrella Movement, which called for universal suffrage in the city’s elections. The city’s top leader is currently voted in by an electoral committee comprised of mostly pro-Beijing elites.

A group of bipartisan U.S. lawmakers introduced the Hong Kong Human Rights and Democracy Act in both the House and Senate, which would require an annual review of whether the United States should continue to offer Hong Kong special treatment. Since the handover, the United States has treated Hong Kong as a separate entity to the mainland in areas such as trade and investments,

The bill also proposes sanctions on Chinese officials who forcibly remove people from Hong Kong to the mainland for detention.

Wong also called on the lawmakers to pass the Protect Hong Kong Act, introduced on Sept. 11, which would ban U.S. companies from exporting crowd-control equipment, including tear gas and rubber bullets, to the city.

Hong Kong police have been repeatedly criticized for using excessive force to disperse and subdue protesters. In an incident on Aug. 31, police charged into a local metro station, beating and using pepper spray on unarmed passengers, many of whom were left cowering and bleeding.

“American companies must not profit from the violent crackdown on freedom-loving Hongkongers,” Wong said.

Both measures have yet to come to a vote, but the CECC chairman, Rep. Jim McGovern (D-Mass.), expressed optimism that they would be pushed through Congress.