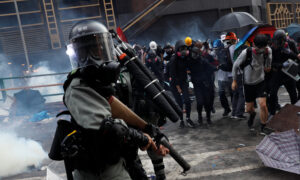 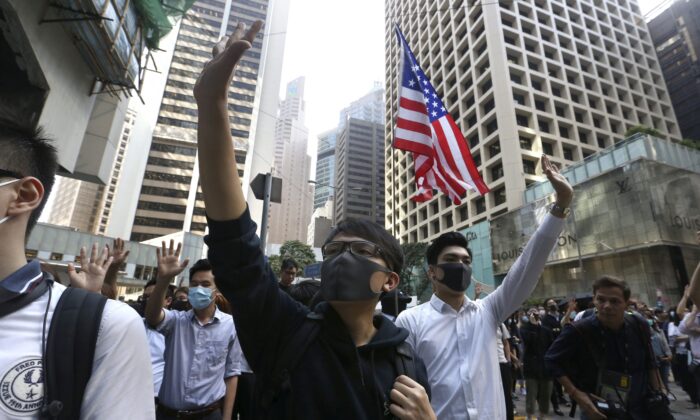 Demonstrators raise their hands during a protest in the financial district in Hong Kong on Nov. 15, 2019. (Achmad Ibrahim/AP)
HK Current Affairs

Hong Kong Activists Call for Global Support After US Laws

Prominent activist Joshua Wong, who was among democracy supporters who lobbied for the new U.S. laws, called them a “remarkable achievement,” with human rights triumphing over crucial U.S.-China trade talks.

President Donald Trump signed the two bills into law on Wednesday. One of the laws prescribes economic sanctions on Asia’s top financial hub and diplomatic action on Hong Kong and Chinese officials found guilty of human rights abuses. The other bans the export of certain nonlethal munitions to Hong Kong police.

Wong said he hopes the laws will spur Britain and other Western nations to follow suit. He said he would participate in a parliamentary hearing in Italy via Skype later on Thursday to press for further global support.

“Now is the time for the Western world to stand with Hong Kong,” he said.

Echoing Wong’s call, dozens of office workers and activists chanted “This is what democracy looks like” and other slogans during a daily lunchtime rally in downtown. Some urged Washington to penalize the city’s embattled leader, Carrie Lam, over the government’s handling of the crisis.

More than 5,000 people have been detained since the unrest began in June over a now-shelved China extradition bill seen as an erosion of freedoms promised when the former British colony returned to Chinese control in 1997. The movement has since expanded its demands to include democratic elections and an independent investigation of police conduct.

The U.S. legislation followed a stunning election victory by the pro-democracy camp in local elections on Sunday, in a stinging rebuke to Carrie Lam.

“It is a major turning point in the protest movement,” he said.

Many protesters feel it’s premature to celebrate because Carrie Lam has not offered any new concessions to their demands. Violence has declined since the polls but protesters plan to hold a “thanksgiving” rally on Thursday night with more gatherings over the weekend.

The move came after the university’s administration said it believed no one remained inside after a two-day search ended Wednesday. Faculty teams found only a young woman in weak condition.

The university has been ringed by police for 11 days as protesters retreated into the campus. Some 1,100 protesters have left or have been arrested.

Hours before the police operation, a masked protester came out from hiding and told reporters there were fewer than 20 others holed up inside. The protester, who identified himself as Ah Bong, said they distrusted the police and opposed the operation.