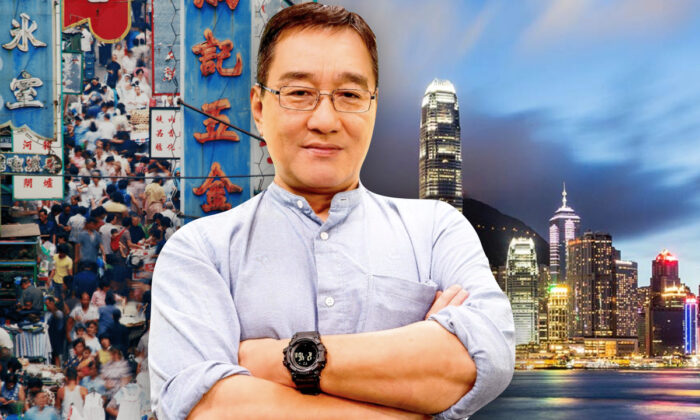 Epoch Times writer Shi Shan talks about the role of Hong Kong in modern China and human history. He believes that its culture has yet to be fully explored. July 2022. (The Epoch Times)
Opinion

Hong Kong: A Haven for Chinese Traditions, a Heritage That Has Never Been Fully Explored

Shi discussed his thoughts on Ni’s life works and their impact on Hong Kong. He analyzed how Hong Kong became a keepsake haven of China’s traditions before the Chinese Communist Party (CCP), and its cultural development expanded globally.

Shi believed that the role of Hong Kong in modern China, and even in human history, has yet to be fully explored.

For a long time, mainland China had called Hong Kong “a cultural desert.” When Shi Shan fled from communist China to Hong Kong, the reality was completely different.

Shi view is that: “Hong Kong’s culture is very Chinese. Because the Hong Kong dialect and Cantonese had never been officially altered, hence, elements of Chinese culture and its charms could be retained in both languages.”

To his surprise, Life in Hong Kong proved to Shi that local books had preserved a lot of cultural subjects. Shi then had an epiphany: Communist China was the cultural desert, not Hong Kong.

Shi said many Chinese fled from the mainland to Hong Kong and sought refuge after 1949. However, that was not the beginning of the migration to the city.

The history of migration to Hong Kong can be traced back to ancient times. People from Zhongyuan in the central plains who fled to Guangdong, and  Hong Kong, were escaping from the Northern Barbarian invasion.

The migration trend in 1949 was triggered by, “People who opposed the CCP or its way of life would seek sanctuary in Hong Kong,” that was also why Hong Kong was nicknamed “a city of refuge,” Shi explained.

Shi was amazed by the British scholars, who saved whatever was in the hands of the Chinese scholars in Hong Kong.

The CCP banished many intellectuals during the cultural revolution. A few of them moved to Hong Kong, and the British managed to salvage their talents along with their knowledge. It was astonishing.”

The British founded the Chinese University of Hong Kong in 1949. It was led by one of the four greatest historians of modern China, Qian Mu. One of the campuses, New Asia College, had been able to preserve a lot of the essence of Chinese culture.

The quartet was praised as the Four Talented Men, who pioneered and contributed to Hong Kong‘s art, literature and music industries.

“He captures the genuine feelings and thoughts of the masses in a particular age. If you want to know what people in the the 1950s were like, don’t ask history experts. You should find out what songs were the most popular then.” He told SCMP.

While each was unique in their talents, all shared common interests: dedication and passion for Hong Kong culture.

Meanwhile, Shi recalled the cultural intellectuals who remained in China after 1949. While they were well educated and published, Shi Shan admitted he did not look up to them.

He felt some people had lost their backbone to the CCP once the regime gained power.

Unlike the cowards, Shi went on; Ni Kuang was a Shanghainese who never looked back since he escaped to Hong Kong.

Ni was well-known for his outspoken, humorous, and anti-CCP personality. Ni had shared discontent publicly against the regime on many occasions. Ni once said, “I would never return to China until the CCP has fallen.”

The late novelist also concluded: Things never changed in his birthplace between then and now: “Modern Shanghai is as backward as it was in 1949.”

To Shi, Hong Kong’s contribution to China’s reform and opening up is indisputable. The same goes for its impact on China’s development, from the economic perspective and life as a whole.

To Shi’s recollection, during the Cultural Revolution, restaurants in China carried a policy of “Pay first, Eat after.” The rule was to prevent people from dining and dashing. “It was the same everywhere in China. Only restaurants in Guangdong served with a little preservation of Chinese traditions. The “Pay First” rule was still in a few eateries but these were in the minority. Guangzhou was the only place in China where you could eat first and pay after.”

Shi then saw where the culture of China and Hong Kong had forked. It was a society of “trust no one” and “money comes first” in communist China versus a community of “share and care” in Hong Kong.

Things changed when the mainland began to open up in the late 1970s. Restaurants in Guangdong cloned the business models of Hong Kong Chinese restaurants.

Shi depicted “Full table set-ups in Hong Kong Chinese restaurants. Each table was covered with a tablecloth. Everyone had their plates, cups, and a pot of tea. We ordered after everything was arranged and settled. We paid after we ate.”

It was a mix of Chinese and British culture, only available to the colony.

That was also how Hong Kong was introduced and brought to the rest of the world.

The assumption turned out to be lifesaving when he moved to the UK. Shi worked as a taxi driver around the poor areas of east London. Crimes and robberies were common. Luckily, Shi never got robbed in the two years as a taxi driver. He said it was because “rumour has it” in the community that he “knew” and “practiced” Chinese Kung Fu like Bruce Lee. No one wanted to mess with him.

Shi bluntly asserted that if it was not for Hong Kong, mainland China could never have evolved economically and socially as it is today.

“Sure, mainland China has copied plenty from Hong Kong—superficially. They never learned the essence and the most important part that made Hong Kong, such as the rule of law.” Shi validated.

Shi said it is unfortunate that mainland China had never acknowledged Hong Kong’s value. It is also heartbreaking for him to see Hong Kong’s deterioration. He believed Hong Kong has yet to be fully explored in modern China and human history.

Shi seemed hopeful for the city, though, “Hong Kong is a melting pot. It has a mix of all the good from the east and the west, which became modern Chinese society. Hong Kong is truly an invaluable place.”

Nie Law and Ying Cheung contributed to the report.