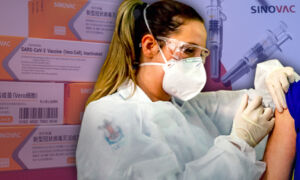 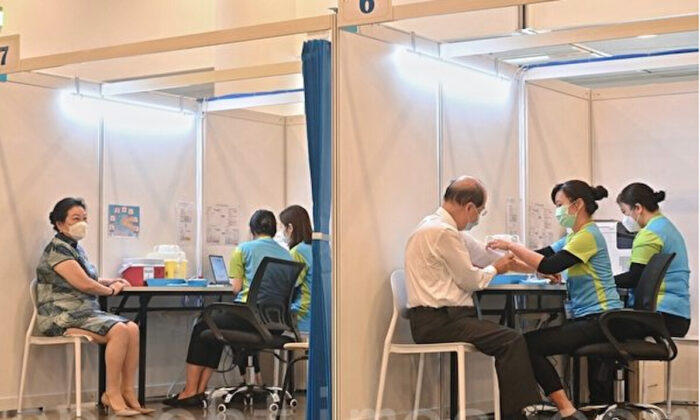 Hong Kong authorities confirmed on April 11 that another citizen died after receiving the China-made COVID-19 vaccine Sinovac. The government did not report the death until local media inquired about it. To date, 14 people in Hong Kong have died after receiving Sinovac and 13 have developed facial paralysis.

16 Deaths and 15 Cases of Facial Paralysis

On April 11, the Hong Kong Drainage Services Department (DSD) confirmed that a 58-year-old male employee fell unconscious at work on April 8 and died after being sent to hospital. The man had been vaccinated with Sinovac on March 16. The government did not voluntarily announce the death and confirmed the case only after the media inquired on April 11, causing public suspicion of intentional concealment.

With so many serious anomalies and deaths, Hong Kong people have become reluctant to get the Sinovac vaccine. Only 2,500 people received a first dose of Sinovac vaccine on April 11, the lowest number since vaccinations began 45 days ago, the government reported on the night of April 11.

As of April 12, about 597,400 Hong Kong residents have received a first dose of vaccine, less than 10 percent of the population.

However, when trying to boost the take-up rate, Chief Executive Carrie Lam did not appear to reflect on the safety of domestic vaccines. Instead, she proposed a series of “incentives” to encourage inoculation, such as relaxing restrictions for residents who have been fully vaccinated.

For example, restaurant staff and customers need to be vaccinated before restrictions on those businesses can be lessened. Lam also stressed that citizens who do not get the vaccine will have “consequences.”

Gordon Lam, the convenor of the Hong Kong Small and Middle Restaurant Federation, questioned in a Facebook post, “Vaccination, which should be an individual choice, is now a privilege to enter a restaurant. How much does the government want to use vaccinations as leverage to get restaurants back in business so that it forces citizens to get vaccinations which have not yet been fully proven to work?”

Hong Kong resident Mr. Wong told The Epoch Times that he didn’t get vaccinated because he didn’t have confidence in the safety of the vaccine. He believes that the Hong Kong government is acting like a gangster, which makes the public even more disgusted.

In March, Han Zheng, the CCP vice premier in charge of Hong Kong and Macao affairs, met with Lam and asked her to “take epidemic prevention and control as the central task” in addition to changing Hong Kong’s electoral system. A politician told Apple Daily that what Lam has been doing is “hand over her homework” to the central government, by using intimidation and money to lure citizens into vaccination to boost the vaccination rate, in the hope of winning credits from Beijing and gaining an edge in her re-election campaign.

While Hong Kong has reported death cases and serious side effects from COVID-19 vaccination, in mainland China, where approximately 160 million people have received vaccines, the authorities have not disclosed any negative post-vaccination cases.

Chinese social media and overseas Chinese media have become the only channels for Chinese citizens to share the side-effects they experience or witness.

On April 14, a Chinese citizen spoke to Sound of Hope, a sister radio network of The Epoch Times, and exposed that two weeks ago, a man died on the same day he received COVID-19 vaccine, leaving behind three children.

The victim, Wang Dajun, 43, lived in Lingxi Village, Zhuanghe City, Liaoning Province. According to the person who spoke to Sound of Hope, Wang received the first dose of COVID-19 vaccine in late March and died that evening. Local authorities have since strictly blocked the flow of such information.

Sound of Hope was able to reach a female resident in Lingxi Village by phone, who verified the information. “Wang was in his forties and was very healthy. He received the vaccination around 10 a.m. that day, and died in the evening,” she said. “He left behind three children, two teenage girls and a 4-year-old son who is a kindergartener. No one in our area dares to get vaccinated anymore.”

Ling Zhenbo, a resident of Yangzhou City, Jiangsu Province, revealed to Radio Free Asia that when he was at the vaccination site, he saw a person collapse to the ground after inoculation. “Other people wanted to take pictures of the incident, but the authorities on-site forbade them to do so. I believe there must be other cases of inoculation side-effects in China, but the media are forbidden to report them.”

Liang Wei from Beijing (not his real name), revealed on Chinese social media that his wife collapsed 10 minutes after getting a shot. She was rushed to China-Japan Friendship Hospital for emergency treatment, and gradually regained consciousness. Liang complained that “the vaccination staff acted as if injection was their only responsibility and they don’t do anything if a recipient runs into problems. When my wife passed out, they did not even attempt to help, like arranging a fast-path hospital admission for her. I had to wait in line and go over the procedures at the hospital myself. And all the hospital costs were out of my own pocket.”

His post on Chinese social media was soon deleted by the Chinese authorities. Another Beijing resident who took notice of the post later shared the incident with Radio Free Asia.

According to Internal documents obtained by The Epoch Times, even local officials and public servants do not trust China’s domestic vaccines, and they use various excuses to avoid having the mandatory vaccination.

For instance, in Xintai Town of Tai’an County, Liaoning Province, there are 65 officials and staff in the township government. Only three people were vaccinated and two others were waiting to receive the vaccine, all others used various excuses to dodge the mandatory vaccination, such as allergies, high blood pressure, heart disease, or planning to get pregnant this year.

In Tai’an County’s Housing and Development Bureau, only one person took the vaccine, the other 55 refused to receive it by claiming that they have underlying health issues.