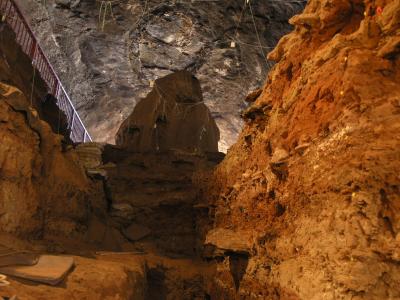 View from the bottom of the excavated area towards the entrance to Wonderwerk Cave. (R. Yates)
Beyond Science

Evidence that people used fire one million years ago during the Stone Age has been uncovered in South Africa by a multinational team of scientists.

Microscopic remains of wood ash were found next to stone tools and burned bones in sediment from Wonderwerk cave, close to the Kalahari Desert.

“Wonderwerk” means “miracle” in Afrikaans, and the cavern is massive, extending 456 feet (139 meters) inwards. It is believed to be one of the longest inhabited caves in the world with evidence of occupation stretching back two million years.

Previous excavations at Wonderwerk have revealed a wealth of information about the people who lived there.

But this new discovery pushes back the timing for use of fire by 300,000 years, according to anthropologist Michael Chazan at the Canada’s University of Toronto.

Both the wood ash and scorched bones seem to have been burned locally, and not transported into the cave by wind or water. There is also surface discoloration on the cave floor which indicates burning activity.

“The impact of cooking food is well documented, but the impact of control over fire would have touched all elements of human society,” Chazan said in a press release.

The findings were published in the Proceedings of the National Academy of Sciences on April 2.