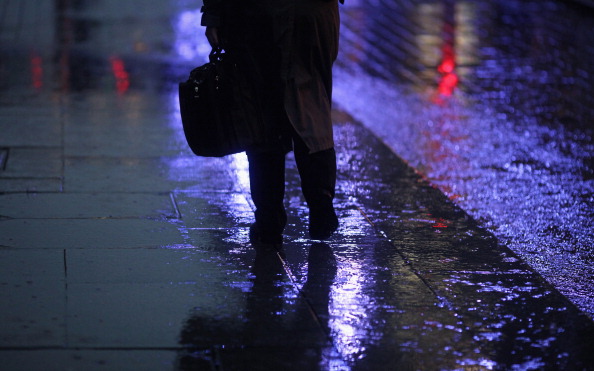 A man walks through a rain shower in Scotland in this file photo. A homeless man has been hailed a hero after he stood in the pouring rain for hours to guard cash left in a stranger's open car in Glasgow on Dec. 14. (Jeff J Mitchell/Getty Images)
UK

A homeless man has been hailed a hero after he stood in the pouring rain for hours to guard cash left in a stranger’s open car.

James McGeown spotted a handbag that contained £450 ($600) on the front seat of a parked car, with its passenger window down.

James then stood in the rain for about two-and-a-half hours, waiting for the owner to return. Eventually, he decided to reach for the bag in the car with the hope of finding the owner’s ID, but there wasn’t any. So he took it to a nearby lawyer’s office for safe-keeping. The receptionist at the office informed the police that the cash had been handed in.

When the owner of the car, John McMonagle, returned with his colleague Alyshia Orford to his car parked outside Glasgow’s Sheriff Court, he was surprised to discover a note telling him the bag was safe in the office.

“I was in shock, I couldn’t believe that the guy never took a penny,” John McMonagle, owner of McMonagle’s chip shop in Clydebank told GlasgowLive.

“To think he is sleeping on the streets tonight when he could have stolen the money and paid for a place to stay.

“This guy has nothing and yet he didn’t take the bag for himself, he thought about others instead. It’s phemonemal. It just proves there’s decent guys out there and especially at Christmas,” he said.

John was so touched by the act of kindness he set up a fundraising page to raise money for James and the homeless community in Glasgow and Clydebank.

“Homeless James noticed the window down and seen the hand bag he stood in the frozen rain for two and a half hours to make sure no one entered my car,” John wrote in a Facebook post.

He added, “This man is homeless and alcohol dependant and an absolute GENTLEMAN, we were even having some banter on realising I follow the opposite Glasgow team from him, he said if I knew that I would have taken the bag. God Bless You James (please share what an amazing thing to do).”

“He came back to the car when I was there and I gave him £40 and thanked him, but I’ll go buy him boots and a good sleeping bag as well. I want to do something to help the guy,” said John, according to GlasgowLive.

He told the website that he is yet to track down James.

Have you been touched by a random act of kindness? Let your friends know by sharing and commenting on this article on social media!