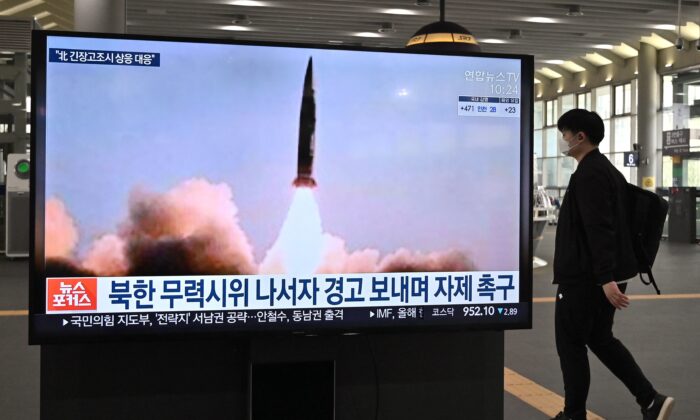 North Korea said on Sept. 13 that it had launched new long-range cruise missiles. These missiles can likely carry nuclear weapons. The missile tests were the Democratic People’s Republic of Korea (DPRK)’s first since March, and highlight the continued danger that China, Russia, and their totalitarian ally, North Korea, hold for truly democratic countries in Japan, South Korea, Australia, and the United States.

China has provided finances, high technology, front companies, and diplomatic cover to North Korea during its nuclear weapons development. Beijing protected North Korea diplomatically at the U.N. from tougher sanctions necessary to augment existing sanctions since 2006. U.N. sanctions weakened by Beijing have as a result failed, making the Chinese Communist Party (CCP) responsible for North Korea’s continued transgressions, and any of the massive harms that could result.

In 2005, the United States effectively sanctioned a Chinese bank for the facilitation of North Korean money laundering. Xi Jinping, in 2011, approved the arguably illegal sale of 16-wheel trucks that North Korea needed to transport nuclear-capable missiles to launch pads. In 2016, North Korean Kwangmyongsong-4 rocket parts that fell into the Yellow Sea, and were retrieved by the South Korean navy, revealed that motor parts, wiring, and other essential components came from China.

Monday’s North Korean cruise missile tests included targets that were 932 miles away. They were hit, according to North Korea’s official media, after the missiles changed trajectory and circled their targets, making counter-missile defense more difficult. The missile strikes are implicit threats against South Korea and Japan’s five main islands, all of which are within range of the new missile. North Korea announced on Monday that the new cruise missile was “a strategic weapon of great significance” and a goal of North Korea’s dictator, Kim Jong-un, announced in January.

As a result of North Korea’s nuclear weapons, all three countries are increasing their investment in missile and other military defenses. These costly military expenditures in democracies are the fault of China, Russia, and the rogue regimes they support, including North Korea. Without these offensively-oriented dictatorships, the United States and its allies would be able to devote more spending to social services.

Given the CCP’s influence over North Korea, the country could be used to launch a proxy war that includes nuclear weapons against the United States and its allies. This could allow Beijing to facilitate nuclear strikes without suffering retaliation, which would effectively remove American deterrence of a nuclear war.

China’s foreign minister, Wang Yi, is scheduled to meet the South Korean foreign minister on Sept. 15. The latest DPRK missile test will give Beijing more bargaining leverage over South Korea during these talks. South Korea increasingly needs the CCP’s assistance in decreasing the threat from North Korea. Indeed, the Sept. 13 test may have been timed by Beijing to assist it in the Sept. 15 negotiations.