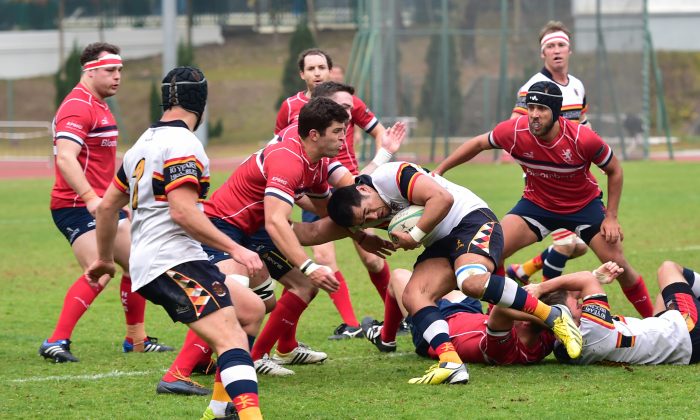 Frank Nelisi tries to make progress for HKCC HKRFU Premiership Champions but finds his way blocked by Kane Boucaut of HK Scottish in the first half of their match at Aberdeen SG on Saturday Feb 7, 2015. HKCC went on to win the match 19-9. (Bill Cox/Epoch Times)
HK Rugby Union

HONG KONG—Leighton Asia Hong Kong Cricket Cub (HKCC) collected the HKRFU Rugby Premiership league cup at the end of their match with Bloomberg HK Scottish at the Aberdeen Sports Ground on Saturday Feb 7 and also retained the Broony Quaich until at least the start of the 2015-2016 season later this year.

HKCC vs HK Scottish
HK Scottish started their match against HKCC with the full intent to win and had a lot of early success courtesy of several scrum infringements by HKCC. Scottish took a 3-0 lead after 6-minutes with a penalty but HKCC hit back with a penalty kick of their own just 2-minutes later. A further two penalty kicks by Scottish fly half David Bird pushed them into a 9-3 lead, but HKCC countered with 2-more penalty kicks by Jason Kjestrup to make them level on points 9-9 at the break. The sin binning of the HK Scottish No.7 Austin Smith towards the end of the first half did not help their cause.

HKCC seemed to be on the ascendance towards half time and immediately attacked after the interval taking an opportune drop goal to push the score to 12-9. The solitary try of the match to sub Amo Tauialo of HKCC converted by Kjestrup pushed HKCC on to 19-9. Despite having Matthew Lamming and Moses Bailey sin binned towards the end of the match the HKCC defence held out for the win.

“Now for the double,” said an ecstatic HKCC skipper Ben Roberts after the game. “We have shown a lot of character and I’m really proud of the guys for putting their hands up and being counted when things got tough.

“We lost only twice this season and have been very consistent. I think the key to our success was the depth we have. But now we have to go on and win the Grand Championship” added Roberts.

Standings
HKCC finished with 60-points, 10-points ahead of HK Scottish with Valley just 1-point behind on 49-points. HKFC’s win over Kowloon pushed them onto 31-points increasing their advantage over Kowloon to 8-points. The Tigers although losing all of their matches and finishing with just 3-losers’ bonus point, played some good matches and were always fully committed.

Grand Championship
The Grand Championship semi-finals to be played this coming Saturday Feb 14 will be between HKCC and HKFC at Aberdeen Sport Ground, and HK Scottish against Valley at Shek Kip Mei.