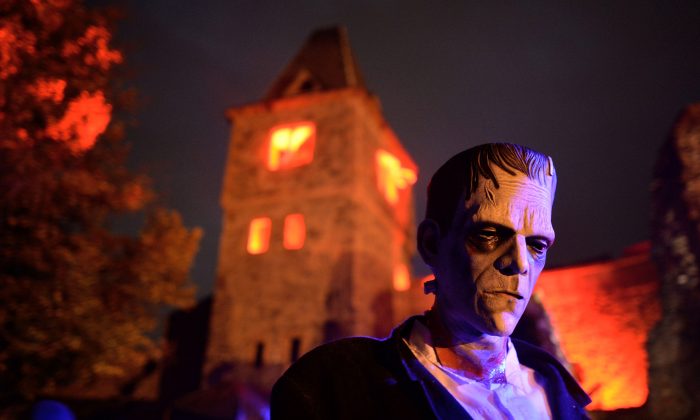 A person dressed as Dr. Victor Frankenstein's monster tries to scare visitors at Frankenstein castle on October 19, 2013, in Darmstadt, Germany. The Frankenstein monster and its creator have roots with a real-life doctor that performed Frankenstein-like experiments over 150 years ago. (Thomas Lohnes/Getty Images)
Good to Know

History and Fiction: The Frankenstein Monster is Born

Mary Shelley, at the age of 18, created a monster that would captivate the imaginations of millions and define an era where anything could be made real through science, even the creation of a monster.

The Frankenstein monster, and his creator Dr. Victor Frankenstein, actually have roots with a real-life doctor that performed some Frankenstein-like experiments over 150 years ago.

On the shores of Lake Geneva, Switzerland, a young Shelley, together with her husband Percy Shelley, were visiting their friend and fellow poet, Lord Byron, at his villa. During that visit, the guests shared poetry, ideas, and short stories. That night, she would develop the first concepts for her book, “Frankenstein; or, The Modern Prometheus,” published in London in 1818.

But as it turns out, Shelley was most likely inspired to create Dr. Victor Frankenstein and his monster based upon a real Dr. James Lind, MD, FRS, (1736–1812), not to be confused with the more famous Dr. James Lind, “The Father of Nautical Medicine” (1716-1794). Lind, at that time, was a mentor to medical students including Percy Shelley.

Lind, a semi-retired widower, was said to have had a study filled with scientific paraphernalia such as telescopes, galvanic batteries, daggers, a variety of electrical machines, and more, and his study probably looked similar to Dr. Frankenstein’s laboratory as depicted in the Universal film. To an impressionable Shelley, this natural philosopher and doctor may have seemed attractive and eccentric, and he definitely made a lasting impression, according to Journal of the Royal Society of Medicine (JRSM).

Lind conducted a number of odd experiments that involved making a dead frog hop much in the same way a live one does. This experiment probably included the use of electrode-like devices, and his research developed into what he called “animal electricity,” according to JRSM.

Some of these experiments were reportedly demonstrated to the royal family of Britain at that time. In a letter written to Sir Joseph Banks, president of the Royal Society, Lind suggested the possibility of using electricity to treat King George III’s fits of insanity.

Moreover, themes of resuscitation are prevalent throughout the story of Frankenstein, including an instance where the monster attempts to revive a girl who drowned in a river. This may be traced to Lind’s own medical studies in Edinburgh under Dr. William Cullen, who pioneered work in the field of resuscitating people who had suffered drowning and asphyxiation, according to JRSM.

Percy Shelley, on the other hadn, did not have a successful medical career as he left Eton before completing his studies. The character Victor Frankenstein may have been the kind of medical student he aspired to be. He did, however, go on to author his own lyrical drama, titled “Prometheus Unbound,” published in 1820.

It is believed that Lind was portrayed as the character Waldman, the chemistry lecturer. Although Lind never strung together corpses or animated dead human tissue, his work would both be the progenitor to the Frankenstein monster as well as pioneer the study of electrical impulses through muscle and nervous tissue.