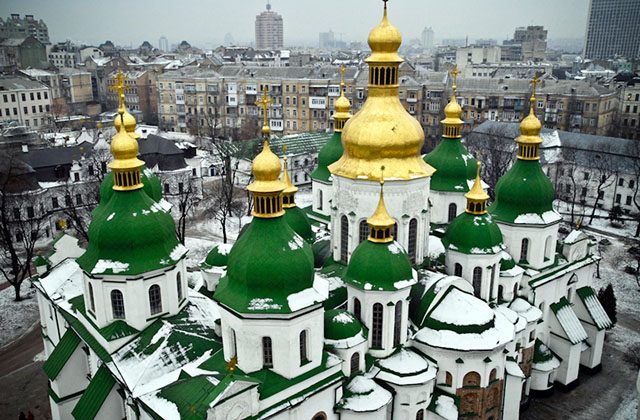 The Fresco St. Sophia condo project is being erected near the historic St. Sophia Cathedral, in historic Kyiv on June 20. The foundations of the old building are being damaged by the new project. (Eugene Dovbush/The Epoch Times)
Europe

Historic Kyiv Threatened at Its Foundation

KYIV, Ukraine—The historic center of Kyiv—a city founded on the banks of the Dnieper River nearly 1,500 years ago—is home to many beautiful and important heritage buildings. But in recent years, the ancient architecture in Ukraine’s capital has been under growing threat as developers erect glass skyscrapers next to old structures, inviting traffic jams and destroying the aesthetics.

This development carries an even greater threat, however. Many old buildings have started to collapse because their old foundations cannot support the load from the adjacent contemporary structures.

One building in dire danger of collapsing is the 1,000-year-old Saint Sophia Cathedral—one of Europe’s most important religious landmarks.

Inside the protected area of the open-air museum known as the Sophia of Kyiv, it is forbidden under Ukrainian law to erect new buildings. The historical monument also was inscribed as a UNESCO World Heritage site in 1990.

Despite the restrictions, a 10-story elite housing estate is being built next to the magnificent cathedral.

Michael Dehtyaryov, member of National Union of Artists of Ukraine and the New York Academy of Sciences, has spent most of his life defending the architectural monuments of Kyiv. He says this construction not only disrupts the esthetics of the cathedral, it also jeopardizes its physical condition.

“The most important is hydrogeology,” says Dehtyaryov.

He adds the foundation of St. Sophia has already started to collapse. Many cracks have appeared on the cathedral’s walls, and a famous mosaic of Mother of God Oranta has become wet.

Although the condo project threatens the monument, the developer, Investment Building Group Ltd., advertises the building’s location near St. Sophia as one of its key features. The complex is in fact called Fresco St. Sophia.

UNESCO has already warned Ukraine to address the issue.

After its most recent inspection in 2011, UNESCO’s report urged the government “to define a protected historic urban area for central Kyiv as soon as possible” and to ensure the laws are implemented. The next review is due in 2013.

The problem of construction near the St. Sophia Cathedral is only one small part of the overall issue of development in Kyiv’s historical center. In the last few decades, the area has become the country’s central business district, where all large corporate offices are located.

Local activists like Timur Ibraimov, from the organization Defend Old Kyiv, say the business district should have been moved to the outskirts of the city long ago. This could have saved the Dnieper River’s historical area from condo developments and other construction projects that are both ruining the traditional feel of the city and causing important heritage buildings to slowly collapse.

“Unfortunately, not every official here is ready to carry out his obligations with all seriousness. He pursues working in a ‘cool’ place. It’s a world-view collapse. And it leads to that kind of situation where new office buildings can rise in the historical center,” says Ibraimov.

Many critics of the construction blame powerful business interests and a culture of corruption.

Dehtyaryov from the Union of Artists also blames corruption and the pursuit of personal gain at the expense of common interests for Kyiv’s predicament. “Our oligarchs are greedy,” he says.

“Business zones there with tall banks, hotels, and trade buildings appear in separate districts, while the historical center remains untouched—it is like an open-air museum, where almost in each and every historical house, one can find heritage apartments of people who lived there in the past. And that is the path the historical center of Kyiv should follow,” he says.