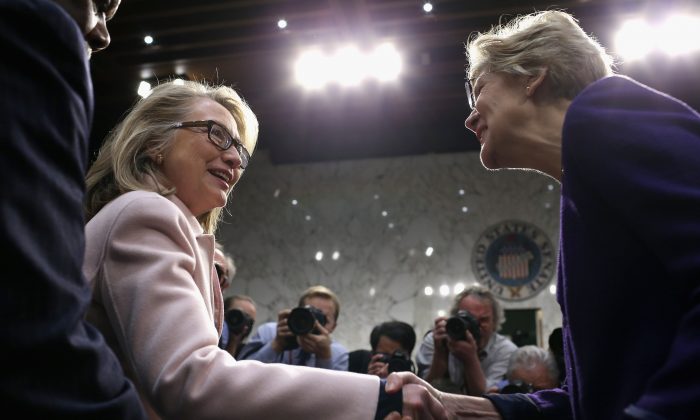 The Democratic frontrunner Hillary Clinton, the next day, tied herself to Warren’s comments, retweeting one of them, along with other anti-Trump tweets in a preview of what’s in store for the general election.

In one particularly biting tweet, Warren said she will “fight my heart out to make sure@realDonaldTrump‘s toxic stew of hatred & insecurity never reaches the White House.”

Warren is one of the names being thrown around for a potential vice president nod—especially after Clinton said she would consider a woman for the position.

Clinton could benefit from Warren’s populist appeal to win back the favor of Bernie Sanders supporters in the general election.

However, that theory has some caveats, as outlined by The Washington Post.

For one—Warren hasn’t endorsed Clinton—the only female senator to not do so. Not only has she not endorsed the Democratic frontrunner, but she’s been in conflict with Clinton, dinging the former Secretary of State for taking campaign contributions from the banking industry.

Clinton sides with the former, endorsing more incremental reforms, whereas Sanders and Warren side with the latter more radical reforms.

However, Wall Street is just the tip of the iceberg when it comes to natural conflicts between Clinton and Warren. The two approach liberalism from separate vantage points—similar to the differences between Sanders and Clinton—and the result shows “very little warmth” between the two, according to the Washington Post.

“Clinton views Warren as someone able to embrace a Manichean view of Wall Street (and the world) because she has the luxury of not needing to ever really deal with people who feel differently. (Massachusetts, particularly at the federal level, is effectively a one-party state.) Warren views Clinton in much the same light that Sanders has cast the former secretary of state in this campaign: prone to deal-making and insufficiently committed to core liberal principles,” the Washington Post stated.

Make no mistake—Clinton and Warren are on the same side when it comes to Trump and the Republicans, and Warren’s star power amongst populists would bolster Clinton’s appeal with those groups—however, it’s unlikely she’ll pick Warren as her running mate.