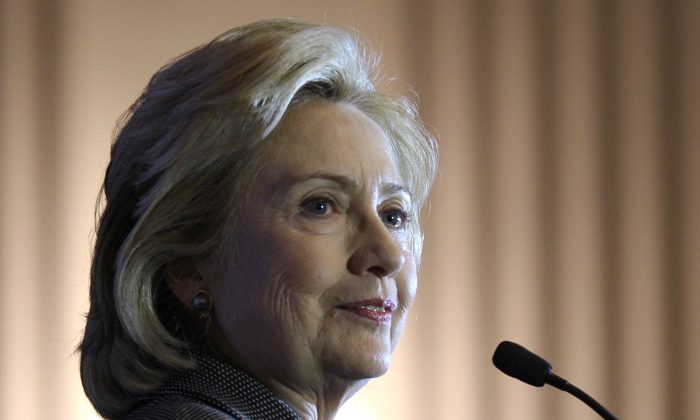 Hillary Clinton’s 2016 campaign for president reportedly may start soon, but her age and health could become a major factor in whether she actually runs or not.

A report in the Globe magazine claims that Clinton, 66, has a brain tumor. And a source told ShowBizSpy that Clinton has been warned by doctors that running for president could kill her.

Clinton wants to announce her candidacy on June 4, 2014, the day her late mother would have turned 95, the report claims.

But her doctors are warning against possible repercussions.

“Hillary’s doctors have painted a grim picture of her health,” said what was described as “a close source.”

“Behind the scenes, they’re telling her, ‘Running for president will kill you.’ But Hillary wants to ignore her doctors because she’s so desperate to be America’s first female president. She believes it’s what she was put on earth to do, and there’s no convincing her otherwise.”

Hillary’s husband, former president Bill Clinton, is telling Hillary that she should think long and hard about running for president.

But “Hillary simply cannot be stopped,” the unidentified source said.

“Even when she was suffering from the blood clot near her brain, she told Bill and Chelsea that she was intent on raising a ‘$5 billion war chest’ for her campaign.”

Clinton has suffered from two blood clots in the past 15 years–one near her brain suffered in December 2013, and another in her leg in 1998, reported Chris Cillizza the Washington Post.

Cillizza pointed out that running and serving as president ” is an incredibly stressful and demanding job (There’s a reason that every president looks as though they’ve aged twice as fast as the average person when they leave the White House).”

“Rest assured that if Clinton does eventually decide to run, her hospitalization for this clot near her brain will be a major topic of discussion,” he wrote. “And she — and her political team — will have to find a way to come up with satisfactory answers.”