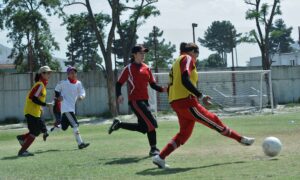 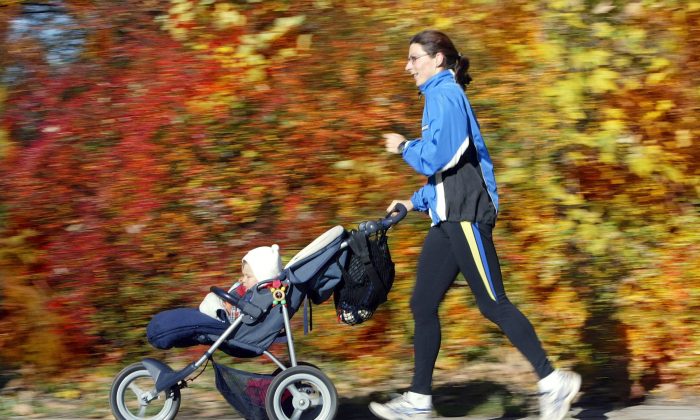 A mother jogs in a park while pushing a pram. Women living in areas with lots of green space have better birth outcomes, according to new research. (Jens-Ulrich Koch/AFP/Getty Images)
Canada

Women who live in neighbourhoods with an abundance of green space are more likely to deliver full-term babies with higher birth weights, according to new research from the University of British Columbia and Oregon State University.

The study, which looked at 64,000 births in the Vancouver area and combined that with satellite data of green spaces, found that severe pre-term births were 20 percent lower and moderate pre-term births were 13 percent lower for mothers who lived near green space. Babies born to mothers who resided in areas with more vegetation were 45 grams heavier.

“Vancouver is one of the greenest cities in the world and we were still able to see these associations,” said study co-author Perry Hystad, assistant professor in the College of Public Health and Human Sciences at Oregon State University.

“Even in a very green city there were areas of lower greenness to areas of higher greenness where we were able to see differences in association of birth outcomes. It was a surprise that there was this robust association. There is a benefit and it wasn’t the traditional environmental exposures that people tend to think about, like air pollution.”

Poorer neighbourhoods have fewer trees compared to more affluent neighbourhoods, but it is the concentration of trees that seems to influence births, Hystad notes.

“If we only looked at poor neighbourhoods we still saw an association between green space and birth outcomes, the same as rich neighbourhoods. Income and education are not driving this association that we were seeing. We were able to control for those factors and see how they were influencing.”

The results should lend support for more trees in all residential areas, he said.

“It does have implications for how we could use this information to prioritize or enhance green areas.”

“Increasing the amount of green space and what we call green infrastructure in cities helps to restore the natural hydrological cycle and absorb more water into the ground. It reduces the pollution that enters our water bodies, which is usually our drinking water as well,” said Clara Blakelock, coordinator of water programs with Green Communities Canada.

“This study just seems like another piece of evidence that show many diverse benefits of having more green space. Maybe it will help us incorporate it more within our cities.”

The study was published in the journal Environmental Health Perspectives.

Kaven Baker-Voakes is a freelance reporter in Ottawa.