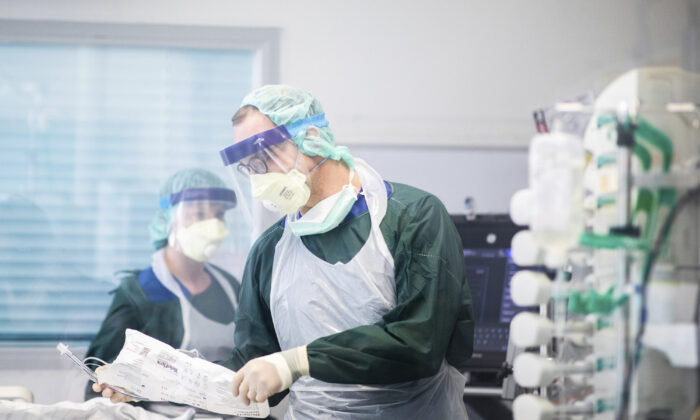 Medics attend to a COVID-19 patient at the University Hospital in Essen, Germany, on April 1, 2020. (Marcel Kusch/dpa via AP)
WORLD

Nearly every country in the world has recorded at least one case of the CCP virus, but there are more than a dozen that have not reported a single patient.

As of Thursday, about 16 countries haven’t yet reported a single case of the Chinese Communist Party (CCP) virus, according to data cited by Fox News.

Countries with less than a million people that have reported no cases include Vanuatu, Tonga, Tuvalu, the Solomon Islands, Sao Tome and Principe, Samoa, Palau, Kiribati, and Comoros.

North Korea, which shares a border with China, where CCP virus originated, has insisted for months that it has no cases. Nearby South Korea has also reported a significant number of cases.

“Not one single person has been infected with the novel coronavirus in our country so far,” Pak Myong Su, a top North Korea health official, told AFP. “We have carried out preemptive and scientific measures such as inspections and quarantine for all personnel entering our country and thoroughly disinfecting all goods, as well as closing borders and blocking sea and air lanes.”

Turkmenistan, like North Korea, is a reclusive state ruled by a totalitarian dictatorship and recently banned the word “coronavirus” in recent days.

“It’s as if it had never existed. The state media are saying nothing about the effects of coronavirus in Turkmenistan and the word has even been removed from health information brochures distributed in schools, hospitals and workplaces,” according to Reporters Without Borders, which reported on the country’s directive.