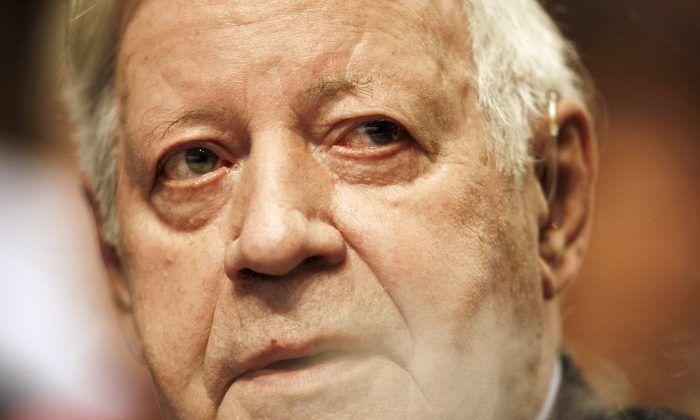 BERLIN—Helmut Schmidt was blunt and down to earth, decisive and brimming with self-confidence.

The attributes that won him plaudits as West German chancellor—as he dealt with some of the tensest moments of the Cold War and a surge in domestic terrorism—occasionally caused offense, especially later in life. But mainly they helped make him a respected and popular elder statesman across party lines.

Schmidt died at his home in Hamburg Tuesday at age 96, according to Die Zeit newspaper, where he served as co-publisher and penned regular analyses.

“He was realistic, discerning and decisive. Yet his decisions were always preceded by extensive, in-depth deliberations and consultations,” Die Zeit wrote in a tribute to Schmidt. “For him, governing was not about just getting by or political survival, it was about disciplined steps taken toward a concrete goal.”

Schmidt, a center-left Social Democrat, led West Germany from 1974 to 1982. He was elected chancellor by lawmakers in May 1974 after the resignation of fellow Social Democrat Willy Brandt, triggered when a top aide to Brandt was unmasked as an East German agent.

“Helmut Schmidt was not only the German chancellor, he was a mentor for the Germans,” said Foreign Minister Frank-Walter Steinmeier.

“Helmut Schmidt was a chancellor of progress and a pioneer of globalization … He has always seen Germany in Europe and Europe always on the world stage.”

As Germany’s new leader, Schmidt brought a sometimes abrasive confidence to the job, along with experience as defense minister, finance minister and economy minister. It served him well as he took over during the economic downturn that followed the 1973 oil crisis.

“Domestically, he sought—even in difficult times—to maintain rationality, which acted as a protective shield against fads and emotion. He abhorred excitability and wishful thinking,” Die Zeit wrote. “‘In politics, emotion and passion have no place, aside from the passion for rationality,’ was his motto.”

Schmidt’s chancellorship coincided with a tense period in the Cold War, including the Soviet Union’s 1979 invasion of Afghanistan.

He went along the following year with the U.S.-led boycott of the Moscow Olympics, although he later said that it “brought nothing.” Schmidt said he had disputes with the United States under President Jimmy Carter over financial and defense issues at the time and concluded “that we Germans could not afford an extra conflict with America,” West Germany’s protector against the Soviets.

Amid efforts to ward off a global recession, Schmidt was among the movers behind the first economic summit of leading industrial powers at Rambouillet, France, in 1975, which later turned into the annual Group of Seven meeting.

“If the euro exists, we owe that to Helmut Schmidt,” said French President Francois Hollande, adding that “it’s a great European whose life has just ended.

“He always said the market economy must be allowed to live but also that it needed a social dimension.”

Born Dec. 23, 1918, the son of a half-Jewish school teacher in the northern city of Hamburg, Schmidt joined the Hitler Youth when his rowing team was included in the Nazi youth organization, but was suspended at age 17—”probably because my griping got on their nerves.”

Drafted as a soldier during World War II, Schmidt’s unit was deployed in the Soviet Union in 1941. He was sent to the western front at the end of the war and taken as prisoner by British forces in April 1945. He was released that August.

Schmidt later said that, as a young soldier, he had recognized the Nazi regime’s lunacy but not its criminal nature at first.

Schmidt entered West Germany’s parliament in 1953, where he earned the nickname “Schmidt the Lip,” a tribute to his sharp-tongued debating skills. He made his name back in his native Hamburg with his decisive 1962 management of severe flooding.

As chancellor, Schmidt’s confidence served him well in facing down the homegrown terrorism of the Red Army Faction, which grew out of the leftist student movement in the 1960s. In a 1977 campaign of violence that became known as the “German Autumn,” the group murdered, among others, West Germany’s chief federal prosecutor and the chief executive of Dresdner Bank.

“The state must react with all the necessary toughness,” he declared.

While Schleyer was being held in 1977, hijackers commandeered a Lufthansa plane to the Somali capital, Mogadishu, to force the release of the Red Army Faction leaders. Schmidt ordered West German anti-terrorist commandos to storm the jet, successfully rescuing 86 hostages. Shortly afterward, three of the terrorist group’s leaders killed themselves in prison and Schleyer was found murdered.

Schmidt later said “I was prepared to resign” if the Mogadishu operation had gone wrong. Although convinced he had taken the right action, he also conceded he felt guilty about Schleyer’s slaying.

It was not easy for Schmidt being between the world’s two superpowers—the United States and the Soviet Union, and his support for NATO’s 1979 “double track” deploy-and-negotiate move to counter the deployments of Soviet SS-20 missiles proved divisive at home.

NATO gave the go-ahead for the modernization of its nuclear force in West Germany and elsewhere in western Europe by deploying cruise and Pershing 2 missiles while, at the same time, seeking a joint limitation of the nuclear buildup through negotiations with the Soviet Union.

Backing the NATO policy helped estrange Schmidt from his own party. Missile deployment in West Germany was fiercely opposed by many younger, more left-wing Social Democrats, and in 1983, an upstart leftist rival, the Greens, entered parliament for the first time.

“Mr. Schmidt was an insightful leader who understood that security is the result of strong defense and dialogue,” said NATO Secretary-General Jens Stoltenberg

“A principled leader, Mr. Schmidt stood behind his convictions even when they were unpopular.”

Schmidt’s chancellorship ended with his ouster in a parliamentary vote in October 1982, when his party’s coalition partner, the pro-business Free Democrats, switched its allegiance to Helmut Kohl’s conservative Christian Democrats due to disputes over economic policy and the squabbling within Schmidt’s party.

Schmidt did not run for chancellor again, citing health concerns.

He had been fitted with a heart pacemaker and also suffered from a thyroid condition. In August 2002, he underwent an emergency bypass operation after suffering a heart attack. Two years later, he had cataract surgery.

In September he was hospitalized with a blood clot in his leg and had been released, but in the last week his health took a turn for the worse, according to his doctors.

After stepping down as a lawmaker in 1987, Schmidt devoted himself to working as co-publisher of the weekly newspaper Die Zeit.

Die Zeit said that despite his advanced age, Schmidt came to the office three or four times a week up until close to his death.

Schmidt continued to weigh in on Germany’s political debates, rarely shying away from controversy—which gave him a reputation for plain speaking that won him favorable comparisons with other German politicians.

“To this day, he ranks among the personalities in our nation who can give direction to their own country and are listened to internationally,” Hans-Dietrich Genscher, his former foreign minister, wrote on Schmidt’s 90th birthday in 2008.

His lasting influence was underlined by the huge success of his 1987 memoir, “Menschen und Maechte” (“People and Powers”)—a best-seller for more than a year.

Schmidt argued in a 2002 book that Germany had brought in too many immigrants in an idealistic attempt to overcome its Nazi past, saying his countrymen were “for the most part xenophobic deep down.”

In 2003, he drew criticism for complaining about the “whininess” of people in the former East Germany, an area that struggled economically for years after Germany’s 1990 reunification.

Schmidt never abandoned his politically incorrect habit of chain-smoking. That earned him and his wife, Hannelore—better known as Loki—the honor of being parodied on German television as “Loki and Smoki.”

In 2008, Hamburg prosecutors threw out an anti-smoking group’s complaint against the couple after they lit up in a theater, flouting a newly introduced smoking ban.

Schmidt and Loki, the childhood sweetheart he married in 1942, had one daughter, Susanne. Their first child, a son named Helmut Walter, died in 1945 when he was only a few months old. Loki Schmidt died at age 91 in 2010.