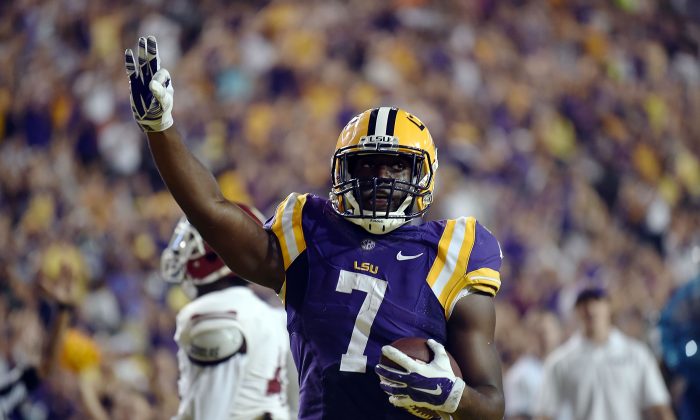 Leonard Fournette has rushed for at least 150 yards in every game this season. (Stacy Revere/Getty Images)
College Sports

Heisman Trophy Watch: Why These 4 Players Are the Favorites

The Heisman Trophy award watch is officially under way. With the regular season now two-thirds gone we have a good indication of which players are in line for the Dec. 12 presentation of the season’s best player. Here are the four main contenders in the chase for college football’s most prestigious award, from least to most likely.

McCaffrey—son of former NFL receiver Ed McCaffrey—is a late arriver to the Heisman watch. The sophomore put up just 66 and then 58 rushing yards in the first two games of the season before stringing together six straight 100-yard contests. Included in his hot streak is a 243-yard, 4-TD performance in the 56–35 win over UCLA that officially put him on the map.

Elliott made more noise at the end of last season when he went for 220 yards in the Big Ten title match and then followed that with 230- and 246-yard games in the two playoff wins over Alabama and Oregon, respectively.

Although he’s rushed for at least 100 yards every game this season, Elliott has only passed the 200-yard mark once—when he went for 274 at Indiana in October—yet it was when the Buckeyes needed it most as Ohio State eked out a 34–27 win. Maybe Elliott saves his best for when the team needs it most and is due for some bigger performances later this month. We’ll see. He still has a ways to go to catch either of the top two on this list.

Boykin has been all that the undefeated Horned Frogs had hoped for this season. The senior has completed exactly two-thirds of his passes, has thrown for at least 300 yards in six of TCU’s eight games, and has gone for more than 400 three different times. In addition, the speedy Boykin has ran for more than 80 yards in three games this season as TCU is second nationally in both yards (616) and points (48.9) per game—behind only Baylor’s video-game like offense.

No surprise here. Fournette has run for at least 150 yards in all seven games this season, while averaging a whopping 7.7 yards per carry for the 7–0 Tigers. Not since Bo Jackson ran past, over, and through defenders in Nintendo’s Tecmo Super Bowl have we seen this much speed, power, and domination in the same running back.

Although he’s run through every defense he’s seen thus far, the sophomore will have his hands full in LSU’s next outing—a Nov. 7 meeting against Alabama’s vaunted defense.