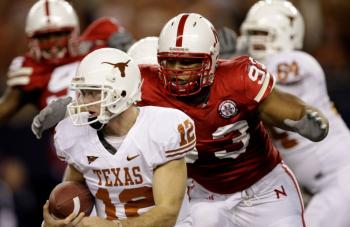 McCoy had opportunities to earn points with Heisman voters but failed to impress.

McCoy and his Longhorns were up against the Nebraska Cornhuskers in the Big 12 Championship game but Texas struggled and barely won 13–12. McCoy had a poor showing, throwing for only 184 yards with three interceptions.

The Gators cost themselves a spot in the BCS title game when they fell in the SEC championship game, losing 32–13 to Alabama. Tebow didn’t make the most of his final chance, with 247 passing yards, a touchdown and an interception. He already has a Heisman in his trophy case from 2007, and has been a finalist three times.

Heisman winning QBs have not fared well in the pros over the last 28 years and that probably doesn’t bode well for the pivots from Texas and Florida.

There are big differences between a college offense and a pro offense and the learning curve can be steep for a young QB, especially if he is thrown into the fire right away.

Boston College QB Doug Flutie was immortalized for his November 1984 “Hail Mary” TD pass against the Miami Hurricanes. He won the Heisman Trophy that year. Although he achieved fortune and fame in the CFL, he never quite achieved the same in the NFL.

Quarterback Andre Ware (Houston) took the prestigious college football accolade in 1989 and only managed to have the proverbial “cup of coffee” in the NFL, getting minimal playing time with the Detroit Lions between 1990 and 1993.

Ditto for Miami Hurricanes QB Gino Torretta, who won the award in 1992 and bounced around a few NFL teams before retiring 1997.

More recently, Nebraska’s Eric Crouch (2001) and Oklahoma’s Jason White (2003) won the award and failed to catch on in the NFL.

Ingram was a workhorse for Alabama in the SEC title game, where he rushed for 113 yards on 28 carries with three TDs and helped his Crimson Tide punch a ticket to the BCS championship game.

Heisman voters won’t choose Ingram based solely on last Saturday’s game but if there were any people on the fence, the Alabama RB may have won them over based on his performance.

Stanford RB Toby Gerhart didn’t play last weekend and his Cardinal team won’t be going to a BCS bowl but he did put up excellent numbers this year.

Unlike QBs, the transition for a running back is easier, as witnessed by the number of Heisman-winning RBs who made a mark in the pros.