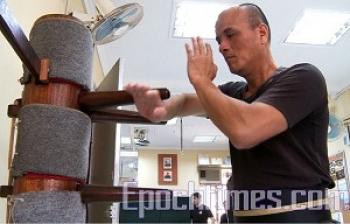 Chiu Hok Yin, an heir to Wing Chun Kung Fu, is good at Chinese boxing. He wishes that the “Chinese Traditional Martial Arts Competition” will have an unprecedented success. (The Epoch Times)
Entertainment

Hong Kong –Wing Chun Kung Fu is a famous southern Chinese boxing discipline, one of the most popular boxing disciplines for the Hong Kong people. The famous Kung Fu star, Bruce Lee, was also an heir. Chiu Hok Yin, an inheritor of Wing Chun Kung Fu, makes efforts to elevate it. He praises the “Chinese Traditional Martial Arts Competition,” held by the New Tang Dynasty TV (NTDTV), as good promotion of traditional martial arts and the virtue of martial arts. He wishes that it will have an unprecedented success.

Wing Chun Kung Fu has a history of more than 200 years. It is a well-known southern Chinese boxing discipline, which originated in the Shaolin Temple. Chiu Hok Yin is one of the best disciples of the famous Wing Chun master Wong Shun Leung. Chiu loved martial arts since childhood. He started learning it when he was no more than 10 years old. He is vice president of the China (Hong Kong) Traditional Wushu Federation, Ltd., and vice president of the Hong Kong Sanda Association. He has won a number of awards at open competitions, such as the Wushu Sanda Competition, Wresting tournament of Guangdong, Hong Kong and Macao, Sanda Cup held by the Martial Arts Federation, Wrestling Competition held by the Martial Arts Association, and the World Wushu Championship, among others. He founded the Chiu Hok Yin Wing Chun Association to teach disciples. He made a set of step-by-step martial arts courses for disciples at different levels.

hiu said that the heritage of Wong Shun Leung first emphasizes the virtue of martial arts. He said that Wing Chun is not only a kind of boxing, but a way of life. He thinks that the virtue of martial arts is from the traditional Chinese Confucian thought, “Do not do to others what you don’t want done to you.” He said, “If you don’t want others to bully you, you should not bully others first, right? The spirit of martial arts virtue is absolutely vital. Although you are very good at boxing, but you don’t know how to control yourself and look for trouble everywhere, however good you are is useless eventually. People will seek revenge on you.”

He said that his master Wong had a rule of not teaching three kinds of people. And he also asks his disciples to have good morality. “My spirit is that I cultivate a person to be a master of martial arts, not a rogue. I’ll not teach him if he’ll become a rogue.” said Chiu.

Chiu pointed out that Wing Chun is efficient and its defense capability is strong. It emphasizes the balance between the left and right brain and it can prevent practitioners from aging. “For example,” he said, “Wing Chun’s Chi Sao emphasizes efficiency. It trains your ability to respond in changing direction and velocity and balancing by relaxing muscles. But its original spirit is a powerful defensive ability.” Wing Chun has the well-known Wooden Dummy, a tool for its disciples to practice using hands and feet at the same time.

Wing Chun was founded by Ng Mui in the late Qing Dynasty and was passed to the father and daughter, Yim Er and Yim Wing Tsun. Yim Wing Tsun taught her husband, Leung Bok Chau. Leung named Wing Chun Kong Fu in memory of his wife. The next generation was Leung Lan Kwai, who passed it to Wong Wah Bo and Leung Yee Tei in a Guangdong troupe. They both passed it to Leung Jan, who passed it to Chan Wah Shan. Yip Man was Chan’s last disciple.

Yip left Guangdong for Hong Kong in 1949. He taught disciples there. Some of his well-known disciples are Leung Sheung, Lok Yiu, Wong Shun Leung, Chu Shong-tin, Bruce Lee, and Leung Ting. They all followed master Yip’s requirement of spreading Wing Chun Kung Fu to the world. Bruce Lee was the most prominent. He spread Chinese martial arts to the world via movies. Yip died in 1972, known as a master of the generation.