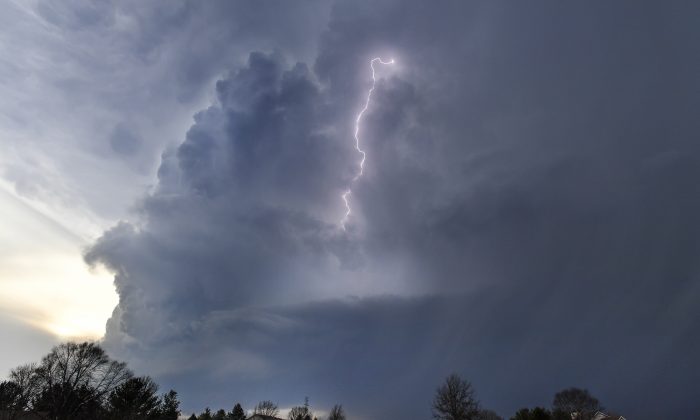 Lightning flashes in storm clouds over the village of Dunlap, Ill., on Feb. 28, 2017. (Ron Johnson/Journal Star via AP)
US News

A powerful derecho storm moved through the Upper Midwest on Friday night, gathering up 73 damaging wind reports, according to the National Weather Service, and the same area remained under threat of more severe weather Saturday.

More than 100 damaging wind reports have already come in. The threat of large hail and isolated tornadoes will continue Saturday for northern Iowa, southern Minnesota, Wisconsin, and Michigan.

The National Weather Service defines Derechos as “widespread, long-lived wind storms associated with a band of rapidly moving showers or thunderstorms.” Wind damage swaths that extend more than 240 miles and contain wind gusts of at least 58 mph or greater along most of the length classify these wind events as Derechos.

In Jenison, Michigan, a trampoline was tossed onto a power line.

No fatalities or injuries were reported with Friday night’s event.

The term “derecho” is Spanish for straight and is used because these events tend to cause straight-line wind damage. It was defined by scientist Gustavus Hinrichs in his paper in the American Meteorological Journal in 1888.

Derechos are known to cause multiple types of damage. They can bring winds of hurricane strength—at least 74 mph—as well as heavy rainfall that can trigger flash flooding in some locations.

Hot and humid weather conditions that result from a heatwave over the Lower 48 create a perfect atmosphere for these events. The most favorable area for this type of storm to develop is on the edge of a strong area of high pressure where the greatest overlap of hot and dry conditions and stronger winds aloft occur. For this particular event, that area is across the Great Lakes region.

According to a 2005 study published in the Bulletin of the American Meteorological Society, there were 153 fatalities that resulted from derecho events between 1986 and 2003.

By Jordan Evans and Allison Chinchar