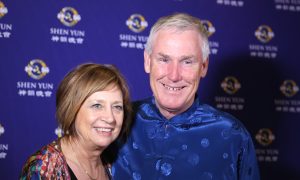 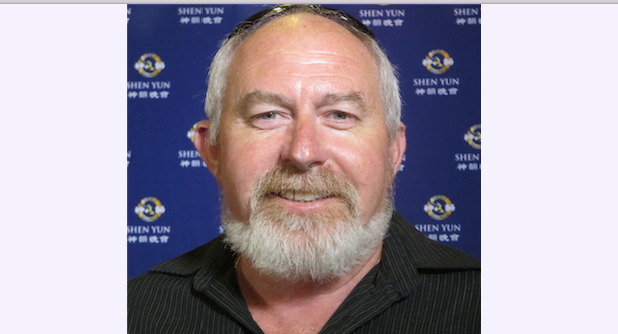 Brett Organ said he was deeply moved and had goosebumps from watching Shen Yun at the Adelaide Festival Theatre, Feb. 22, 2015. (Courtesy of NTD)
Adelaide

Mr. Organ said he was deeply moved and had goosebumps from watching Shen Yun.

“It makes you feel very joyful and very happy, and the whole message of peace and helping other people,” he said.

Shen Yun, based in New York, was conceived in 2006 to reawaken the true authentic 5,000-year-old Chinese culture in the performing arts, almost destroyed by 65 years of communist rule.

“People can see other people’s lives through watching the dance and music. I think it’s something the whole world needs.”

The Shen Yun website states, “One discovers a sea of traditional Chinese culture. Mortals and divine beings merge on stage as one. … Principles such as benevolence and justice, propriety and wisdom, respect for the heavens, and divine retribution, all come to life, washing over the audience. Originating from Confucianism, Buddhism, and Taoism, these ideals are the essence of traditional Chinese culture.”

Mr. Organ is a small business owner and he said he was a gymnastic champion at state level and has taught gymnastics for many years.

As a gymnast he particularly liked the acrobatics in the dancing. “Their skill was incredible, it was beautiful,” he said.

“The show [Shen Yun] was fantastic, I really enjoyed it, it was very skilful and beautiful, very soft moment. Absolutely awesome, something that shouldn’t be missed.”

Year 11 student Jasmin Todan is a talented artist with a passion. She does ballet, modern jazz, tap dance, musical theatre and a lot of performing arts as part of her school studies and privately outside of school.

“The performance was amazing, mind-blowing. I am so interested in dance, I wanted to go up on stage and do the steps with them as well.”

Both the classical and the ethnic dances looked very challenging to Ms. Todan. She said as a dance student she realised how technically difficult many of the moves were and how many years of practice it would take to achieve that

“I understand how hard that is to do. That takes lots of practice. I wouldn’t be able to do that,” she said.

“I liked the choreography. It gives me a bit of inspiration.”

Ms. Todan has a lot to tell her friends about Shen Yun, such as the gorgeous costumes, the interactive digital backdrops and depiction of China’s beloved myths and legends performed on stage.

“I would tell them it [Shen Yun] was amazing and mind-blowing, and the boy’s jumps left my mouth open.”

Susan Christo, is doing her doctorate in Immunology, was also at the Shen Yun performance with her sister, Lisa Christo. Both girls have done traditional Greek dancing.

“I absolutely loved it, a great blend of Chinese culture and performing arts, I really enjoyed the stories they presented, and the vivid colours and the synchronicity between all the dancers, it was nice to see that,” Ms. Christo said.

“You could watch an individual dancer and they have a unique style. But when you looked at the entire stage, they acted as one—quite unique actually, I really enjoyed their performance, their art form.”

Because of the dancing Ms. Christo said, “We can appreciate the costumes and the foot work, but I think the flexibility is something that is very different and gorgeous, it would take a lot of training.

She loved the costumes. “Gorgeous, rich and vivid in colour and intricate and very detailed and very shiny. There is a lot of effort put not making them.”

“You could see that in every move the dancers made sure they were all synchronised and touching the same part of the costume, it was fantastic to watch.”

She thought it fantastic to have a live orchestra and the music complemented the dancing and the lighting in the background.

Shen Yun translates as ‘divine beings dancing’ according to the website and both the Christo sisters agreed it was a perfect translation.

“It’s a perfect depiction of what we saw, a brilliant, very peaceful, very passionate culture. Lovely to see.”