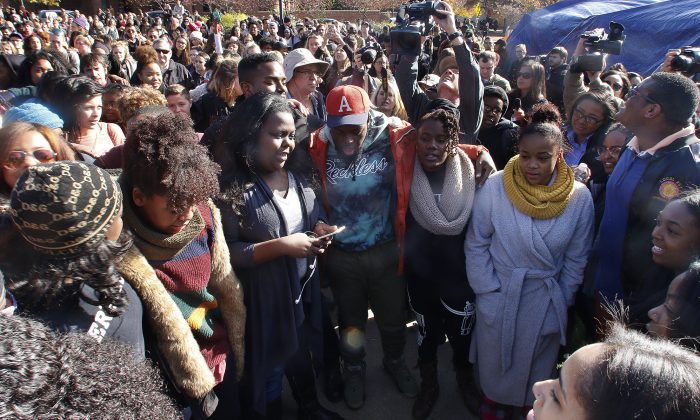 Supporters gather after the announcement that University of Missouri System President Tim Wolfe would resign Monday, Nov. 9, 2015, in Columbia, Mo. (Matt Hellman/Missourian via AP)
US

The letter of a 13-year-old boy from Virginia has gone viral on social media, which explains some of the racism he’s experienced at school.

Za’Khari Waddy, who will be 14 in December, said that he’s faced racism after entering Tabb Middle School in Yorktown, Virginia, according to the New York Daily News.

His letter comes as students on several college campuses have complained about unfair treatment. The president of the University of Missouri System, Tim Wolfe, resigned from his post after students, and the school football team, demanded it.

“Ever since we’ve moved to this area my son has been faced with racism,” Za’Khari’s mother Zettrona Powell wrote in a letter. “He’s been asked if he was going to rape or rob a young lady, he’s been pushed into lockers and called a n—-r on numerous occasions.”

Za’Khari and his mother have reported the racism to his school, but they said nothing became of it. On Oct. 27, a student said a horrifically racist thing to him after an away game.

He published this letter in response:

To Whom It May Concern:

Yesterday on the football bus coming from our football game a kid … started saying racist things to me. He then started saying he does not like blacks and he told me 200 years ago my ancestors hung from a tree and after he said that I should I hang from a tree. That made me super mad, so in the locker room I told him not to call me n—-r or that I should be hung on a tree. The coaches took me away from the kid because I was really mad and they think I was going to fight him but I want someone to do something about it because I’m tired of boys messing with me because of my skin. I’m at my boiling point with this. Please do something about this because when I bring it to the office/principle you do nothing about it and I’m tired of the racism.

His mother explained she tried to facilitate a meeting between her family and the families of the boys who have allegedly harassed her son. They told her, “Please know that the matter is being investigated,” reported the New York Daily News.