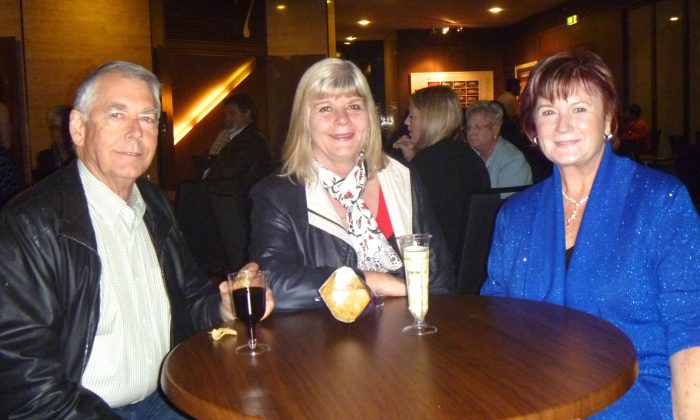 ADELAIDE, Australia—Healthcare as an occupation took a backseat, while Phil and Stephanie Botten enjoyed time out to regenerate themselves. The couple were watching New York-based Shen Yun Performing Arts’ presentation on Easter Sunday, April 20, with friend Brenda Barei.

Ms. Barei was “really pleased” they had come to see the the world’s leading classical Chinese dance company at the Adelaide Festival Theatre.

“It is just beautiful, graceful, and elegant. I loved the mix of colors in the costumes; it is something different from what we have ever seen in other [dance],” she said at intermission.

The Shen Yun website mentions some of the elements in the show. “Sophisticated dance techniques, an orchestra joining instruments from both the East and West, beautiful costumes, and a stunning back drop—this is Shen Yun at first glance. But digging deeper, one discovers a sea of traditional Chinese culture. Mortals and divine beings merge on stage as one. Principles such as benevolence and justice, propriety and wisdom, respect for the heavens, and divine retribution, all come to life, washing over the audience. Originating from Confucianism, Buddhism, and Taoism, these ideals are the essence of traditional Chinese culture.”

Mr. and Mrs. Botten run their own healthcare management business in activating stem cell repair, having retrained in naturotherapy.

“I love the graphics, I thought that was amazing. That was fantastic and I loved the way the waves were being switched around, Ne Zha Churns the Sea,” Mrs. Botten said.

She also commented on the costumes. “Stunning, I really loved them. Ms. Barei agreed with her friend, and said she ranked Shen Yun as 11 out of 10.

“It’s very clever the way that they have done the graphics, as Stephanie said. They jump over the steps and suddenly they are up in the sky or into the waves. Oh, the precision is incredible.”

The Shen Yun website describes the state-of-the-art backdrops. “Inspired by 5,000 years of history, these spectacular landscapes truly reflect China’s multifaceted geography, society, regions, and dynasties. Some scenes even transcend this world, entering a heavenly palace where fairies dance amidst mystical clouds or peering into the solemn majesty of a Buddhist paradise,” says the website.

“These digital backdrop designs complement and synchronize all aspects of the performance: the characters, color of the costumes, specific dance movements, props, lighting, the story being told, particular notes played by the orchestra, and special audio effects.”

Mrs. Botten thought it was “amazing.” Her husband thought the backdrops were “clever,” but said he was most looking forward to seeing the action in the second half of the show, after enjoying the synchronised noise in the dance called Mongolian Chopsticks.

However, oone part of the show left him with some questions. He asked, “Is it right that they are not allowed to meditate [in China] now?”

Shen Yun uses performing arts to present stories that bring to life the inner essence of China’s divinely inspired culture, according to the company’s website. “This includes ancient legends, characters and tales from history, and representative events from the modern world, including Falun Gong cultivation stories. Falun Gong, also called Falun Dafa, is guided by the principles of ‘Truthfulness, Compassion, and Tolerance.’ It has helped over a hundred million Chinese people understand and return to the essence of traditional Chinese culture—Confucian, Buddhist, and Taoist schools of thought.”

“And yet, the Chinese Communist Party, whose regime and ideology are in stark contrast with the traditional culture of China, has targeted Falun Gong for persecution.”

She “absolutely” agreed with her friend, who said, “It’s wonderful to learn the history, the culture, the origins of the culture. It’s educational for us.”