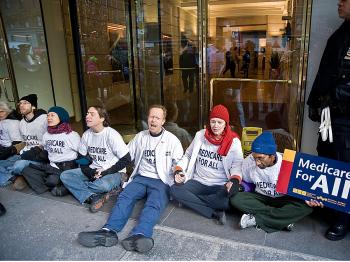 Dissatisfied with Sen. Schumer's failure to push for universal health care, the protesters interlocked arms and sat down in front of the entryway. Police then arrested them. Among the protesters were patients, doctors, and nurses.

The protesters were chanting, “55 is not enough. Medicare for all!” They were upset the current legislation being considered by the Senate only plans to give Medicare to people 55 and up.

The organizers of the protest, Mobilization for Health Care for All, organized similar protests in 16 states around the country including one outside the senate office buildings in Washington, D.C. The organizers scheduled the protests on Human Rights Day, claiming that health care is a human right.

U.S. Senator Bernie Sanders of Vermont recently proposed an amendment to the health care bill that would provide Medicare for all. The amendment would create a single, nonprofit public financing agency and would be federally funded but state administered. The protesters hoped to put pressure on Senator Schumer to support Sanders' amendment, aware they would be arrested for blocking the entryway to his office building.

Neurologist Laura Boylan was among the protesters arrested in the sit-in. According to Boylan she is frustrated with Congress and sees it as being controlled by "moneyed special interest groups." She said she has seen too many people denied treatment they need, and too much use of procedures that are unneeded. She blames it on “perverse incentives.”

Calls made to Schumer's office were not returned as of press time.

Ken Weinberg, an emergency room physician, said he is outraged at what is happening with health care. As a physician he feels "thwarted" by "insurance professionals telling me who I can treat and how I can treat them."

"I don't know what to say to patients," he said, referring to those who can't afford to be admitted.

On Tuesday, Democrats proposed to replace the public option with a national insurance program provided by private insurers and expand Medicare coverage to include those 55 and up. Currently, Medicare covers those 65 and up.