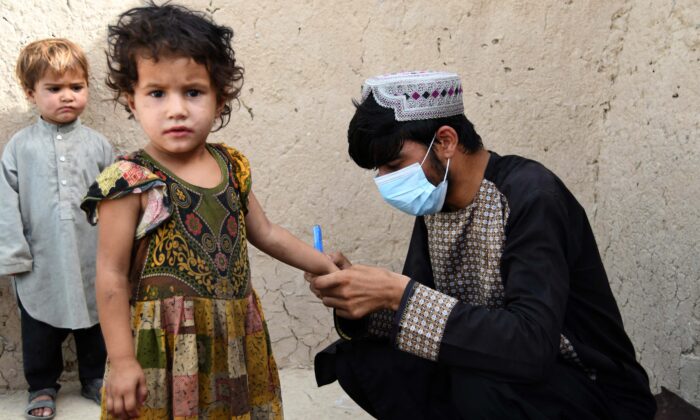 A health worker marks a child's finger with ink after giving polio vaccine at a campaign in Kandahar, Afghanistan, on June 28, 2022. (Javed Tanveer/AFP/Getty Images)
International

Global health agencies have issued a “red alert” on children’s health as trends like rapidly rising rates of severe malnutrition and COVID-19 disruptions have combined to drive down childhood vaccination levels to their lowest in decades.

The World Health Organization (WHO) and UNICEF, the United Nations-affiliated children’s charity, jointly said on July 15 that the world has seen the biggest sustained drop in childhood vaccinations in around 30 years.

“This is a red alert for child health. We are witnessing the largest sustained drop in childhood immunization in a generation. The consequences will be measured in lives,” Catherine Russell, UNICEF Executive Director, said in a statement.

A key benchmark for immunization coverage—a three-dose vaccine against diphtheria, tetanus, and pertussis (DTP3)—dropped five percentage points between 2019 and 2021 to 81 percent.

In total, over the three-year period, around 67 million children have missed out on one or more doses of the DTP shot.

It’s a similar story with other vaccines. For instance, over a quarter of global coverage of the human papillomavirus (HPV) vaccine that was achieved in 2019 has been lost.

“This has grave consequences for the health of women and girls,” the agencies said, noting that the current global coverage of the HPV vaccine is just 15 percent even though the shot has been available for 15 years.

The agencies said this “historic backsliding” in vaccination coverage was particularly troubling as it was occurring as rates of severe malnutrition were rising.

Children who are malnourished typically have weaker immune systems and, for them, infections like measles can often prove fatal.

“The convergence of a hunger crisis with a growing immunization gap threatens to create the conditions for a child survival crisis,” the agencies warned.

Many factors are driving the drop in immunization coverage, according to the agencies. There’s a larger number of children living in conflict zones where access to vaccines is limited, as well as various impacts on vaccine delivery systems associated with the COVID-19 pandemic, such as supply chain disruptions, resource diversion, and lockdowns.

“While a pandemic hangover was expected last year as a result of COVID-19 disruptions and lockdowns, what we are seeing now is a continued decline,” Russell said.

“We need immunization catch-ups for the missing millions or we will inevitably witness more outbreaks, more sick children, and greater pressure on already strained health systems,” she added.

Data cited by the agencies indicates that the vast majority of the children who account for the drop in vaccination rates were living in developing countries, namely Ethiopia, India, Indonesia, Nigeria, and the Philippines.

While vaccine coverage fell everywhere, the biggest impacts were seen in East Asia and the Pacific, the agencies said.