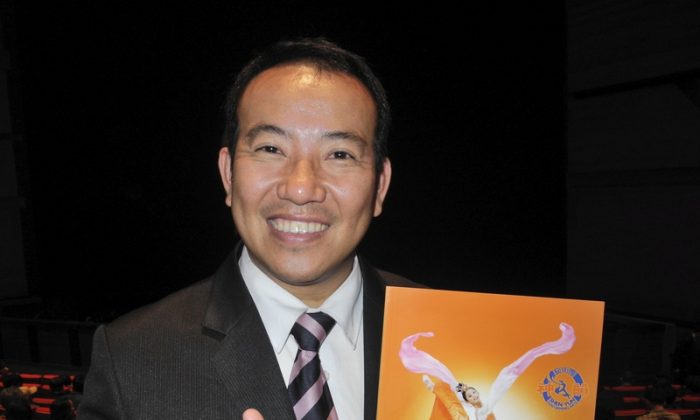 TAICHUNG, Taiwan—Zheng Jingyi, head of ROC Physical Education Development Association, was in the audience for the first performance of Shen Yun Performing Arts International Company at the Jhungshan Auditorium, on the afternoon of March 12, 2014.

Even though he had already attended the show this year as New York-based Shen Yun toured Tainan, he accompanied Changhua city mayor along with friends and relatives to the show in Taichung. Deeply impressed by Shen Yun, Mr. Zheng is a great fan of Shen Yun, having also seen the performance last year.

“All of the Shen Yun performers are putting their efforts into promoting kindness … I like ‘Truthfulness, Compassion, Forbearance … I tell everyone I meet that they should see Shen Yun once in their lifetime. It contains information that we should calmly accept, free of any bias.”

Watching the show the second time this year, Mr. Zheng was still moved. “In fact watching it again really makes a difference … seeing the segment on Falun Dafa practitioners who are practicing exercises and then arrested, I am in tears. Because I believe it is our right to have a belief we want. Humans shouldn’t be illegally suppressed this way.”

Mr. Zheng was delighted with the rich tapestry of music and color. “The hand-made costumes had vigor and beauty woven into them. The live orchestral performance allows the audience to indulge in beautiful melodies. This feast of the arts purifies our hearts. We need to calm ourselves down. Our society really needs something different … .”