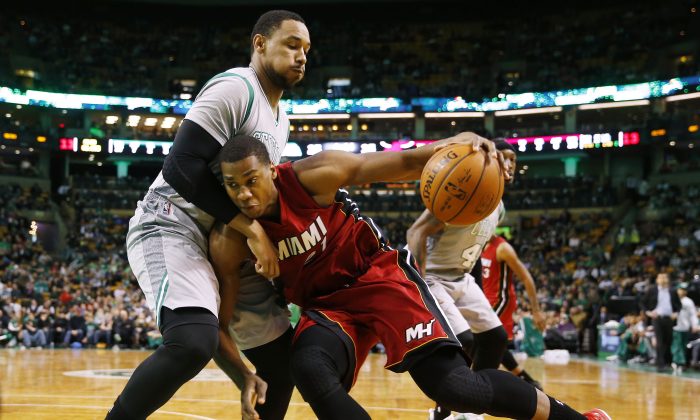 Miami Heat's Hassan Whiteside tries to get past Boston Celtics' Jared Sullinger during the first half of an NBA basketball game in Boston, Sunday, Feb. 1, 2015. (AP Photo/Winslow Townson)
NBA

Hassan Whiteside could find himself and his agent negotiating a lower-than-expected contract in a year-and-a-half because of his anger issues.

Whiteside has taken the NBA by storm twice this season–first, he started putting up huge numbers that astonished fans and analysts; second, he started getting into it with opponents, in the worst way possible. He’s earned tens of thousands of dollars in fines and several suspensions, including Tuesday night when the Heat face the Nets.

NBA writer Ethan Skolnick says that Whiteside’s issues, if not fixed, are “certainly going to cost him some money.”

“This is one long probationary period for Hassan Whiteside. There’s no question, based on his talent and what we’ve seen so far, this is a guy who is going to end up making eight figures in the summer of ’16,” he said in a Bleacher Report video.

“But we’ve also seen some maturity issues, that’s the reason that he wasn’t in the NBA for so long, and these have really cropped us, especially after he’s had some success and after other teams have tried to get under his skin a little bit.

“I think it’s very possible that Hassan Whiteside–if he doesn’t get his act together in the next year and a half– could be back in a position that he’s trying to prove to people that he belongs in the league, instead of a guy who has already proven that,” he added. “It’s certainly going to cost him some money.”

On the other hand, if Whiteside, 25, can learn how to handle his temper, he could easily earn a gigantic contract when he hits the market as an unrestricted free agent.

Whiteside, a top candidate for the league’s Most Improved Player award, is averaging 17.9 points and 16 rebounds per 36 minutes in what’s basically his first season in the NBA (he only played 19 games before this season). He’s shooting 62 percent from the field, and is also providing 3.9 blocks per 36 minutes.

But the young center has been hampered by his propensity to emotional outbursts. The suspensions and fines hurt, but so does his quickness to foul. In only 22 minutes a game, he’s averaging 2.6 fouls. That’s not enough to foul out most games, but coaches work hard to get their big men to play great defense without fouling.

Whiteside expressed regret soon after getting the Flagrant-2 foul on Monday night.

“I mean I just feel terrible about it. It’s probably the worst 12 hours of my life,” he told reporters.

“I felt like I let my teammates down,” he said. “It was a terrible decision on my part. I just want to apologize to everybody and Heat fans.”