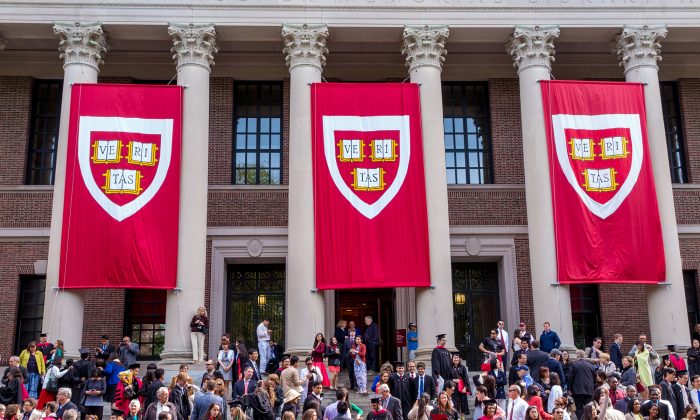 In light of the CCP virus threat, Harvard University will replace its commencement ceremony originally scheduled for May 28 with virtual events.

In a March 20 email, Harvard’s President Lawrence S. Bacow explained to students and faculty that the decision was made in response to guidance from the Centers for Disease Control and Prevention as well as the school’s own health experts.

“Given the advice we are receiving from the Centers for Disease Control and Prevention, other public health officials, and our own faculty, who are among the world’s leaders in infectious disease, epidemiology, and virology, it is difficult to imagine how we could safely hold such a large gathering this spring,” Bacow wrote. “We recognize that people need to start making plans soon, so we thought it best to provide guidance now.”

According to student newspaper The Harvard Crimson, thousands of members of the Harvard community, including family members, faculty, and alumni from around the world, would gather on campus for the graduation ceremony each May. This year’s event would feature a speech by Martin “Marty” Baron, the executive editor of The Washington Post.

The traditional gathering will be “indefinitely postponed,” Bacow wrote. In order to make sure the Class of 2020 graduate on time, individual schools will host their own virtual ceremonies, and graduates will receive their diplomas in the mail.

Bacow said in the email that the University is considering putting on a belated ceremony for the Class of 2020 in the future.

“We plan to host an in-person celebration sometime later, once we know it is safe to bring people together again,” Bacow wrote. “We intend for this ceremony to have all of the pomp, circumstance, and tradition that is typical of a Harvard Commencement—with as many of the traditional campus festivities that typically precede Commencement as possible.”

Bacow’s announcement comes after a series of measures were taken to try to curb the spread of the virus in the Harvard community. The Ivy League school decided last week to move all its classes online after spring break. All of its 36,000 students were told vacate their dorms by March 15.

Harvard is the latest to join a growing list of American colleges and universities that have decided to cancel or postpone their graduation ceremonies this year. According to a tracker created by Forbes, nearly 70 institutes across the nation have announced that they won’t hold the ceremonies as originally scheduled.