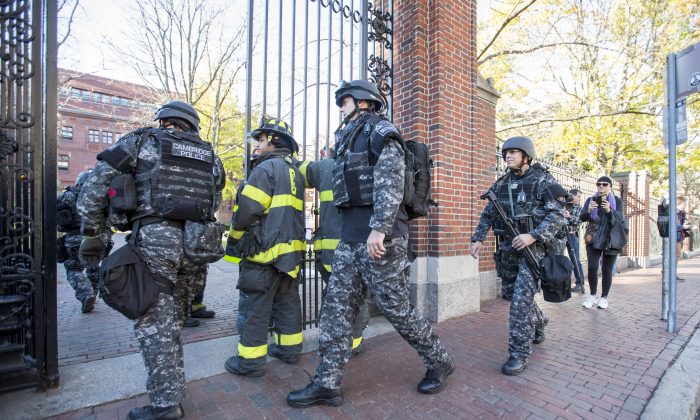 CAMBRIDGE, MA - NOVEMBER 16: Cambridge Police SWAT team members arrive at Harvard Yard following a bomb threat that was made on campus on November 16, 2015 in Cambridge, Massachusetts. Multiple buildings were evacuated and the Harvard Yard was shut down so that authorities could search. (Photo by Scott Eisen/Getty Images)
US

Harvard University evacuated several of its buildings on Nov. 16 after an anonymous bomb threat was sent to the Cambridge, Massachusetts campus.

“Earlier today, we received via email an unconfirmed bomb threat that has led to the evacuation of The Science Center, Sever, Emerson, and Thayer Halls. Harvard University Police Department and other law enforcement searched the four buildings,” reads a statement from Katie Lapp, the executive vice president of the university.

Lapp, however, added, “Nothing to substantiate the emailed threat has been found.” Local and federal law enforcement officials investigated the threat and the source was not determined, the university said.

The Crimson noted that the same four buildings were threatened nearly two years ago during final exams. The threat was later determined to be unfounded. Eldo Kim, a student who admitted responsibility for the 2013 bomb threat, was charged by authorities for a bomb hoax. According to an affidavit in the case, Kim was “motivated by a desire to avoid a final exam scheduled to be held.”

Officials closed down Harvard Yard for several hours, according to an afternoon update from the university.

Harvard first notified its students via its social media accounts and website of a bomb threat at around 12:30 p.m. EST.

“The safety and security of members of the Harvard community is always our top priority. In the wake of recent tragic events in locations ranging from Paris to Beirut and beyond, we understand that this type of threat will cause great anxiety for many across our campuses. We will continue to be vigilant as we carry on Harvard’s mission of expanding and disseminating knowledge,” reads the statement from Lapp.

Earlier on Monday, Fitchburg State University evacuated the McKay Building, which is also used as an elementary school for the city of Fitchburg, due to an anonymous bomb threat. The campus was reopened later in the day. Classes were also canceled at Cape Cod Community College due to a bomb threat that was written on a wall.