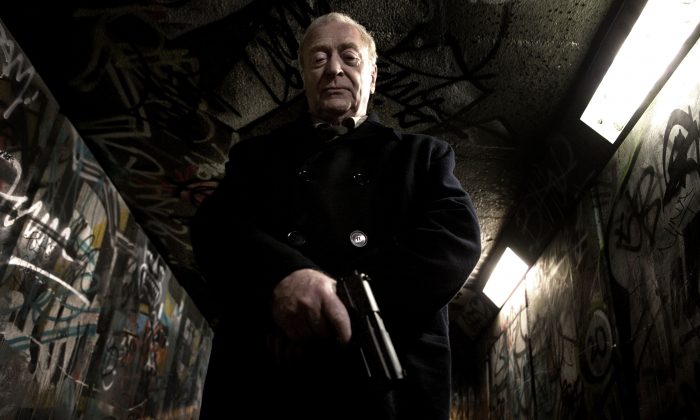 By James Carroll
Print
Hard-hitting, socially conscious and intense, Harry Brown is being widely described as the British Gran Torino. There are certainly surface similarities (isolated old man against the young criminal element in his neighbourhood) but Daniel Barber’s kitchen sink social commentary-cum-violent revenge thriller seems far more rooted in the real than Eastwood’s fantastic fable. For the most part anyway.

Michael Caine is Harry Brown, an ex-Royal Marine entering his twilight years alone after the early death of his daughter and recent passing of his beloved wife. Living on a rough estate in south London, law-abiding citizen Harry hides away from the racial and gang-related violence that takes place right outside his window. But when his best friend Len (David Bradley – cantankerous caretaker Argus Filch in the Harry Potter series) is murdered by a local gang of drug-dealing hoodies, Harry feels compelled to act and is forced to dispense his own brand of extreme justice.

A film that doesn’t shy away from revealing some home truths and asking difficult questions, Harry Brown is a raw examination of issues that many people in the UK face every day. Eschewing voguish Guy Ritchie gangsta stylistics for something altogether more realistic, Barber captures the grime of London council estates in much the same way Danny Boyle encapsulated the Edinburgh drug scene over a decade ago in Trainspotting. Basically, this ain’t your Friday night glamour picture.

Starting slow and gradually escalating, the 103-minute film takes its sweet time getting to the Death Wish-style violence. It goes out of its way to show you just what the problem is dahn (sic) on the estate and the hopelessness of the situation for the good-natured inhabitants, as well as the police, in disposing of the criminal underbelly. So don’t go into this thinking it’s Michael Caine’s Taken. It is much more socio-realist than that slice of guilty pie. That said it does become increasingly far-fetched as Harry carves his way through the crime syndicate, and the police simultaneously incite riots on the streets of London.

Look, Harry Brown does tread familiar vigilante ground. It is neither massively original nor groundbreaking. But it is insightful and honest and very, very British – which is something to celebrate if you ask me. It pulls no punches either: in no way does this make the gangster/drug scene seem appealing. So perhaps it ought to be shown to kids as an educational video – this is not the life you are looking for.