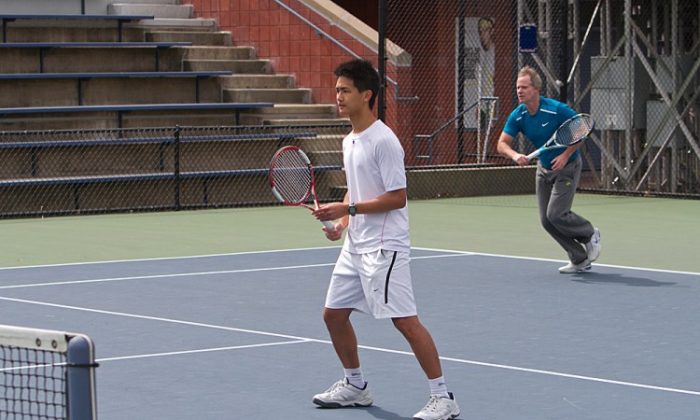 Lou Wiggs, Regional Vice President of the United States Tennis Association Eastern New Jersey, watches a student of the Harlem Junior Tennis Program taking a mid-air swing at the “40-Love,” which is the 40-year anniversary of the program at the USTA Billie Jean King National Tennis Center on May 7. (Benjamin Chasteen/The Epoch Times)
US

NEW YORK—For 40 years the sound of children playing tennis has filled the Harlem Armory, as the home of the Harlem Junior Tennis Program. One of the first kids enrolled in the program was a 12-year-old named Dante Brown.

“It is the age-old story, the kid who grows up in the inner city, always getting in trouble,” he said.

His introduction to tennis came at age 10. “One day, I was coming home from a fight, dirty and bloody and there was a guy who lived in my building who saw me coming. He asked if I wanted to learn to play tennis. I said ‘yes’ because it was something different,” Brown said.

The neighbor took him to local tennis courts 15 blocks away, something that opened Brown up to a whole new world outside of people he knew from his neighborhood. He enrolled in a summer public tennis program, where he excelled.

At age 12 the kids and adults he met through the summer program encouraged Brown to play tennis indoors during the winter—something he had no idea was even possible.

Brown applied to the new program at the Armory and was accepted. While sharpening his tennis skills, he was given educational direction outside of just homework. The program introduced him to opportunities he never knew was possible and he wound up receiving an athletic scholarship to Southern Illinois University.

Forty years later you can still find Brown at the Armory, although instead of taking lessons, he is the one giving them. Brown is currently the director of Tennis and Programming at the Harlem Junior Tennis and Educational Program (HJTEP).

“I am what’s called a ‘lifer,'” he said, adding that the HJTEP coined the term for anyone who graduates from the program and comes back to help after their graduation. Brown said not only students can be “lifers” but parents who continue to help the program after their children graduate can earn the title as well.

“It is someone who believes in the program [so much] that they just cannot stop being a part of it,” Brown said.

Executive Director Katrina Adams, who took over the program in 2005, recognizes the dedication of the “lifers” as an integral piece of the program’s continued success. “They know what the program did for them and for them to want to instill those life skills on the court into today’s youth. I think that is remarkable,” Adams said.

When Adams took over the program, only 79 kids were enrolled, but today the program serves just under 1,100 youth. She credits partnerships with schools in the community and the Harlem Children’s Zone for the substantial growth.

The program continues to push tennis development, but has added a stronger emphasis on the educational and social development components since Brown’s childhood days.

“We see the kids today are sorely lacking in those areas, but for the kids, tennis is the carrot that is going to keep them coming back,” he said.

Kids involved in the program today must maintain a C average in school to be able to play. If they do not, they are given mandatory tutoring until they show improvement.

“It is holding the kids accountable. They are not just here to play tennis. It is really a holistic way of growing up in the classroom and on the tennis court,” Adams said.

Hopeful for Another 40 Years

On Monday the HJTEP kicked off a yearlong celebration of their 40th anniversary with a Celebrity Pro Am at USTA Billy Jean King National Tennis Center in Flushing, following a fundraising auction. The HJTEP is hoping to raise money to help the next generation of Harlem youth find the benefits of tennis beyond the court.

Brown has seen the impact HJTEP has had on his life, but he has also been fortunate enough to teach three generations of one family, something he feels lucky to have witnessed. “The key is, they keep bringing their children back because they know the value of what the program does. That says it all in itself,” Brown said.