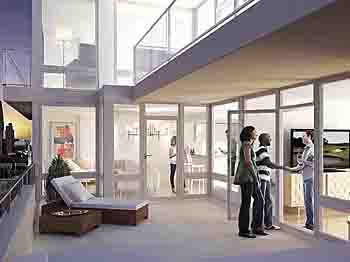 Jeff Bennett of R&B Developments on the rooftop of 117 WindowsOn123. (Charlotte Cuthbertson/The Epoch Times)
US

“It's like creating a piece of art,” said Bennett. “To take a piece of land or a dilapidated building and make it beautiful.”

Bennett and Radoncic joined forces to form R & B Development in 2003. And with Radoncic's existing T & R Construction company put into the mix, the ability to build quality without all the middlemen costs. Many of the 180 construction workers are craftsmen from Eastern Europe.

The larger of the two WindowsOn123 buildings has 26 units, with a common gym, a 3,000 sq. ft. rooftop terrace, and 15 parking spaces—seven of which come with their own Smart Car. There are 6 one-bedroom units, 16 two-bedroom units and 4 three-bedroom penthouse apartments. There is a large bottom duplex with more than 1,000 sq. ft. of outdoor space.

Floor-to-ceiling glass and outside space are big drawing cards of these units, but it's the quality of materials and finish that really impresses. The granite façade and Siberian mink marble, along with the glass from Germany, and kitchen counters from Israel, make this building truly global.

The architect is Bosnian Dan Sahic, who has now completed a few projects with Bennett and Radoncic. “He's really part of the team. He's part of the family now,” Bennett said.

Both Bennett and Radoncic were not sure whether Harlem was ready for high-end apartments, so they tested the waters with a small conversion in 2003.

“We're both driven on creating the best thing we can.”

“We made three units, no holds barred, no expense spared,” Bennett said. The result was a record price for Harlem, $1.3 million-plus for a fourth floor walk-up, and that set the pace for more work in the neighborhood.

The area around WindowsOn123 has a village feel, with low buildings, lots of light, wide sidewalks, and generally less hustle and bustle. The subway is conveniently close and it is 13 blocks from Central Park.

Sales were launched three weeks ago and Corcoran broker David Daniels said there was "lots of activity" and offers are pending.

“The enthusiasm is driven by the project itself, not by the market,” he said.

The features appealing to Daniels are the fact the stove hoods are vented to the outside—many apartments recirculate the vented air internally. There is also central air conditioning and heating, which is “extremely rare to find in this price range,” he said, emphasizing that in standard apartments the units blow hot air onto the balcony in the summer. The heating and cooling is paid in the common charge.

The interest shown in the building has been representative of Bennett's target market, “Well-heeled, well-established, well-employed.”

Bennett may have got his penchant for fine things through his previous work with antiques, but it is a standard of quality that he won't compromise. “It's cheaper in the long run to buy quality,” he said.

“The fun part is having a dream become a reality,” he said, not sure where his inspiration comes from, “I don't know, it just comes.”