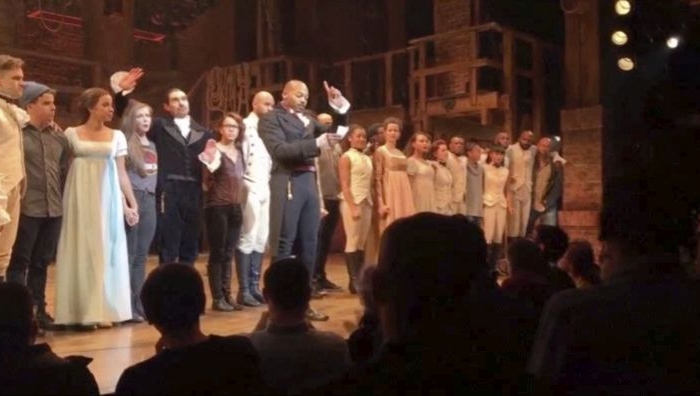 In this image made from a video provided by Hamilton LLC, actor Brandon Victor Dixon who plays Aaron Burr, the nation’s third vice president, in "Hamilton" speaks from the stage after the curtain call in New York, Friday, Nov. 18, 2016. Vice President-elect Mike Pence is the latest celebrity to attend the Broadway hit "Hamilton," but the first to get a sharp message from a cast member from the stage. (Hamilton LLC via AP)
Politics

‘Hamilton’ Actor: ‘There’s Nothing to Apologize For’

If Donald Trump is waiting for an apology from the cast of “Hamilton,” he will have to continue to wait.

Actor Brandon Victor Dixon, who plays Aaron Burr in the celebrated musical, told “CBS This Morning” on Monday that “there’s nothing to apologize for.” Dixon gave Vice President-elect Mike Pence an onstage earful about equality at the end of Friday’s performance.

Trump has taken to Twitter several times to demand an apology. Pence on Sunday said he wasn’t offended by the message.

Dixon said “Hamilton” creator Lin-Manuel Miranda had a hand in crafting Dixon’s remarks, although Dixon said he “made some adjustments.”

Dixon said that both Trump and Pence are welcome to come backstage and meet with the cast at any time, adding, “Art is meant to bring people together.”

From the stage on Friday night, he sparked controversy by saying he and the cast were “alarmed and anxious” that the Trump administration “will not protect us, our planet, our children, our parents, or defend us and uphold our inalienable rights.”

The musical is by Lin-Manuel Miranda, who wrote the story, music and lyrics. It stresses the orphan, immigrant roots of first U.S. Treasury Secretary Alexander Hamilton and has been cheered for reclaiming the nation’s founding story with a multicultural cast.

Dixon’s unprecedented address of the vice president-elect has divided many, with critics saying theater should be a safe place and the “Hamilton” cast comments seemed aggressive. But supporters contend Dixon was respectful and note that artists speaking out is a timeless ritual.