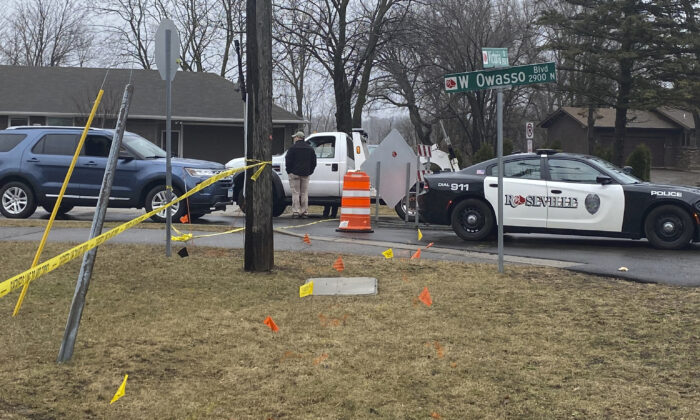 Authorities investigate the scene of a fatal April 5 shooting in Roseville, Minn., on April 6, 2022. (Nick Ferraro/Pioneer Press via AP)
Crime and Incidents

Officers in Roseville responded to a report of shots fired around 7:30 p.m. Tuesday and encountered a chaotic scene as they immediately came under fire, Police Chief Erika Scheider said during a briefing.

An officer was shot in the face and his colleagues dragged him to a squad car and rushed him to a hospital, where he was listed in stable condition, Scheider said.

The 53-year-old suspect moved around the wooded, residential neighborhood about 8 miles northeast of Minneapolis and continued to shoot at officers and houses, in some cases breaking windows, officials said. Neighbors received an alert to shelter in place as police, Ramsey County sheriff’s deputies and State Patrol troopers searched for the gunman.

The shooting continued for about an hour before a Roseville officer spotted the suspect outside a home, returned fire and the suspect sustained a significant injury to his groin area, Scheider said. The suspect later died at a hospital, the chief said, and the Bureau of Criminal Apprehension (BCA) will determine whether gunfire from the officer led to his death.

A rifle was recovered at the scene and turned over to the BCA, which was investigating the shooting. The BCA has also received police body camera video from the scene, the chief said.

The suspect was known to police, Scheider said, because there were previous mental health-related calls involving the man and his family.