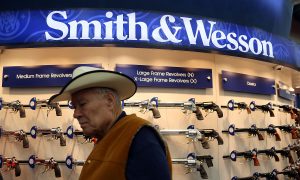 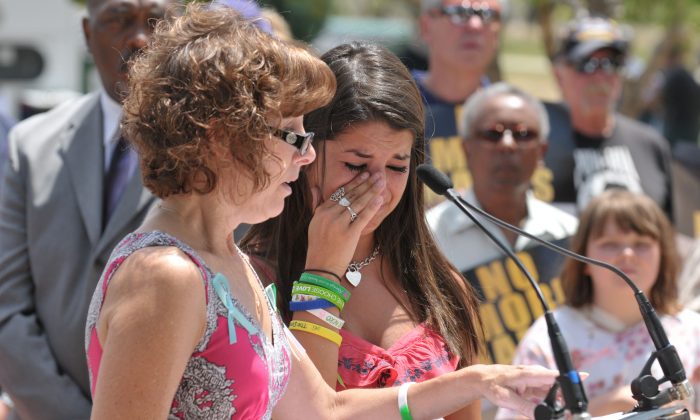 Jane Dougherty (L) and Carlee Soto read the names of victims at a remembrance ceremony in Aurora, Colo on July 9. Both women's sisters were killed during the Sandy Hook Elementary mass shooting. The event was supported by the No More Names tour. (Tom Cooper/Getty Images)
US

The names were from a list of over 7,000 Americans that have been killed with guns since the mass shooting at Sandy Hook Elementary School, Newtown on Dec. 14, 2012.

The names were read in Oak Creek, Wis., where a large crowd gathered for the anniversary of the shootings in a Sikh temple, Aug. 5, 2012, that killed six people and critically injured others.

A reminder of the daily loss of life to gun violence in America, the name reading was not a singular event. Supporters of gun control legislation carry it out in other towns and cities across America, part of a bus tour organized by Mayors Against Illegal Guns.

The No More Names: National Drive to Reduce Gun Violence began in Newtown, Conn., June 14, and will, at the tour’s completion, have visited 25 states in 100 days. The 950 mayors in the group, gun violence survivors, and community organizations support the tour.

The bus tour is just one of the activities gun control advocates are using to lobby members of Congress during the summer recess.

They want to change the minds of lawmakers who voted against gun control legislation in the Senate this year. No More Names called on supporters in Fargo, N.D., to urge Sens. Heidi Heitkamp (D-N.D.) and John Hoeven (R-N.D.) to reconsider their votes against comprehensive background checks.

According to most surveys, a large majority of Americans support expanded background checks. But legislation has not been passed. Senate Majority leader Harry Reid (D-Nev.) told a pro-gun control group that looming budget battles will prevent Democrats from trying to enact background checks legislation this year.

“I think sometime next year we’ll revisit that issue. I’m almost certain of it,” Reid told the group Moms Demand Action for Gun Sense in America, according to The Nation.

Conducted by Third Way, a Washington-based public policy think tank, the study tracked gun sales on one website across 10 states during June and July, and found that at any given moment, more than 15,000 guns were offered for sale without background checks. Around 5,000 of the guns were semiautomatic.

“In 2,000 Web ads in these states, buyers were intentionally seeking private sellers where background checks are specifically exempt from federal law,” Third Way stated on its website.

Pro-gun control groups have not been deterred by recent legislative setbacks. Many have campaigned for years on the issue.

Ladd Everitt, director of communications for the Coalition to Stop Gun Violence, said they are focusing their attention on Virginia during the recess and on two key House members, Rep. Eric Cantor (R-Va.) and Rep. Scott Rigell (R-Va).

They have spent money on billboard and newspaper ads, and have already held rallies in the two representative’s districts.

They hope Cantor will introduce a vote in the House on background check legislation and that Rigell will co-sponsor HR 1565, a companion bill that will ensure those who should be prohibited from purchasing a firearm are listed in the National Instant Criminal Background Check System.

Everitt was upbeat, noting that HR 1565 already has 183 co-sponsors and he believes the “magic number,” 218, is attainable.

“It is something that is going to take hard work,” he said, offering the long view as an option. “It might end up being something we need to go into the 2014 midterms and reward some people who have voted the right way and end the political careers of some folks who haven’t.”

The pro-gun lobby will also be active. Gun Owners of America (GOA) in a number of mailings asked supporters to fight for gun rights and “defund anti-gun Obama care.”

“The very assumption that the federal government has to ‘do something about guns’ violates the Constitution, which guarantees that our right to keep and bear arms ‘shall not be infringed,’” said GOA spokesman Erich Pratt.