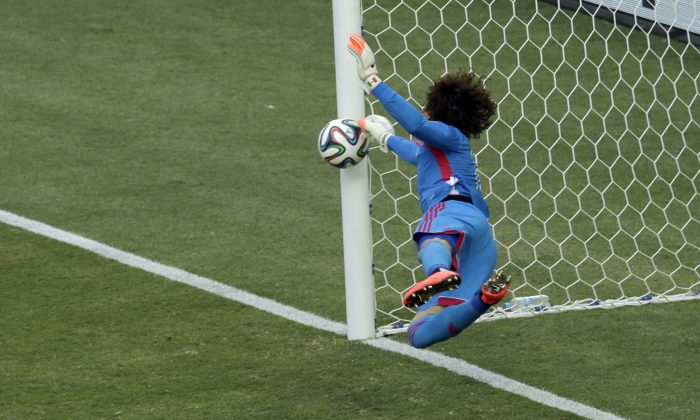 Mexico's goalkeeper Guillermo Ochoa makes a save during the group A World Cup soccer match between Brazil and Mexico at the Arena Castelao in Fortaleza, Brazil, Tuesday, June 17, 2014. (AP Photo/Themba Hadebe)
Soccer

Guillermo Ochoa, the starting goalie for the Mexican national team, made many impressive saves against Brazil on June 17.

Ochoa, who shut out Cameroon in El Tri’s first match on June 12, was a much-needed backbone for Mexico against the powerful Brazilian squad.

A particularly impressive save came after Neymar delivered a header to the left side of the goal.

Using the new goal line technology, which enables replays, it was shown that Ochoa dove toward the ball and swiped it just before it crossed the goal line.

Ochoa, 28, is currently a free agent professionally after playing for Ajaccio last season. He was on the 2006 and 2010 World Cup squads, but he never appeared in either tournament. He did start at the 2009 CONCACAF Gold Cup, which Mexico won.

He has also had a series of stunning saves in the second half, including denying a header from Thiago Silva.

Check out videos of his saves below.

Mexico will face Croatia on Monday, June 23 for its final group stage game.

Brazil will play Cameroon on the same day for its final group stage game.

See stats from the Mexico-Brazil game via AP below.