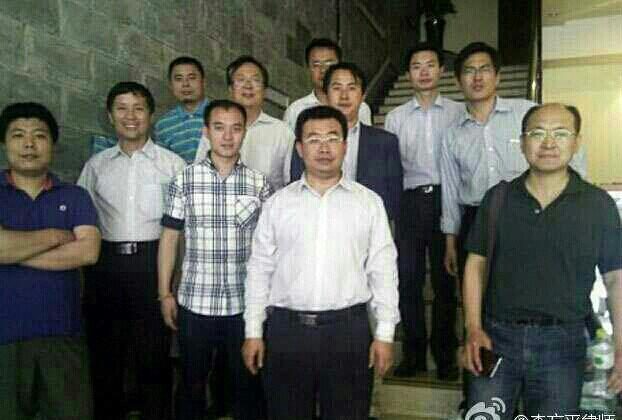 The eleven lawyers were photographed after their arrest and beating in Sichuan on May 13 and 14, after they visited a brainwashing center there. From left to right: Wen Haibo, Tang Jitian, Wang Cheng, Tang Tianhao, Liang Xiaojun, Jiang Tianyong, Guo Haiyue, Li Heping, Zhang Keke, Lin Qilei, Yang Huiwen. (Li Fangping via Weibo.com)
China

A group of nearly a dozen Chinese human rights lawyers who attempted to investigate an extralegal “brainwashing center” in the southeast of the country were violently set upon by guards on May 13, before being handed over to police, who beat them further and held them overnight before releasing them.

The lawyers went to visit the Er’ehu Legal Education Center in the city of Ziyang, Sichuan Province. The term “legal education center” is a euphemism employed by Chinese authorities to refer to places that carry out “thought reform,” otherwise known as brainwashing, on practitioners of the Falun Gong spiritual discipline. The Falun Gong website Minghui.org, documents a long and detailed history of mental and physical torture against Falun Gong at Er’ehu.

Seven lawyers were first arrested outside Er’ehu for “obstructing official business,” according to China Human Rights Defenders (CHRD), a research and advocacy network.

Four more lawyers were detained after rushing to Ziyang to intervene in the arrests; CHRD reports that they were detained and questioned before being released.

Jiang Tianyong, one of the individuals first reached after the incident, said in a May 14 interview with The Epoch Times: “We just arrived at the legal education center and didn’t expect them to be so aggressive and violent. They leapt up and starting hitting us. Later they took us to the local police lockup — there were a lot of plainclothes police and domestic security officers there. The entire time they were extremely violent; we were kept in the lockup until the early hours of the morning on May 14, and then they took me, Li Heping, and Tang Tianhao, to the police lockup on Binjiang Road. They took the other five lawyers to another place and again kept them overnight — only today at 11:40 were they freed.”

Deutsche Welle Chinese asked Liu Weiguo, another civil rights lawyer, for his thoughts on why the group received such violent treatment. Liu said that it’s likely related to the identity of the group detained at the center, and that “the lawyers ripped open the black hole in China’s law enforcement system–the system of arbitrary detention, black jails, torture, and forced disappearances and the persecution of Falun Gong that takes place under the stability maintenance system.”

While some reports described the facility as a black jail, that term is most often used when referring to places that hold petitioners – people who travel to the capital to seek redress for grievances.

The Er’ehu Legal Education Center in Ziyang has a more specific focus, which is to “transform” and torture Falun Gong adherents. It has held hundreds of practitioners since it was established in 2006; two Falun Gong practitioners were killed there in early 2012, according to Minghui. Brainwashing centers such as this have been established in almost every city in China, operating outside of the Chinese judicial system. They are controlled by the local Communist Party Political and Legal Affairs Committee and the local branch of the 610 Office, an extrajudicial agency tasked with coordinating the persecution of Falun Gong.

A Feb. 19 report in Minghui says: “According to incomplete statistics, there may be around 400 or 500 Falun Gong practitioners detained at Er’ehu.”

The bold visit to the facility comes just one month after the persecution of Falun Gong, which has gone on in China since 1999, after being initiated by former regime leader Jiang Zemin, received mainstream exposure when a detailed article about the Masanjia labor camp, known for carrying out brutal torture against Falun Gong practitioners, was published in the Chinese photography magazine Lens.

The extraordinary torture methods described in that article caused it to go viral on the Chinese Internet, until the authorities clamped down on its spread.

Around the country rights defense lawyers, called weiquan lawyers in Chinese, rallied to support the group that journeyed to Sichuan. Teng Biao, another well-known weiquan lawyer that did not go to Sichuan, posted to Sina Weibo, a Twitter-like microblog, a photo of five other attorneys holding a sign that said: “Ziyang: Madly attacking lawyers will not cover-up the crimes of the brainwashing center!”