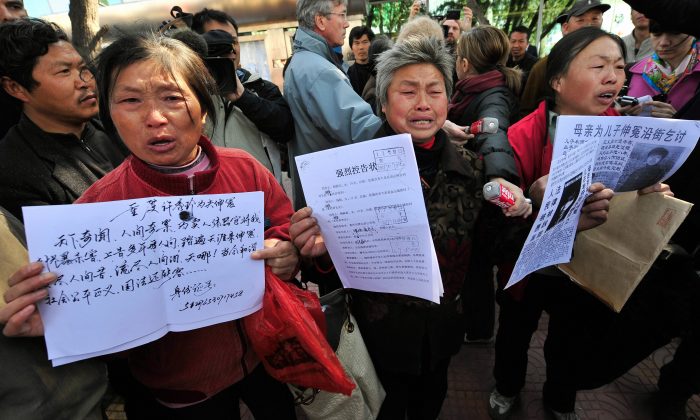 To rescue a friend and fellow protester against official injustice, a group of activists in China broke into a “black jail” in a remote part of Xinjiang, the far northwestern province, and released him—dealing as much damage to the jail as they could in the process.

The black jail is a name Chinese people use to refer to the illegal places of detention established by local regime officials, which they use to detain petitioners, activists, and whoever else it is convenient to detain, all without any legal procedure. Petitioners are Chinese citizens that present their grievances, or petition, higher level authorities in Beijing, about the abuses they say they have suffered in their home towns.

The escape of Tang Xueqin was aided by 14 friends, who broke into a low-income housing building in Shihezi City of western China’s Xinjiang Uyghur Autonomous Region at around 4 a.m. on Aug. 24. The building was being used as a black jail.

“The housing was supposed to be given to people with low incomes, but it’s become a black jail to detain petitioners,” Tang said in an interview with the New York-based New Tang Dynasty Television.

Tang told NTD that he was detained on Aug. 16 because the local government wants to stop him from going to Beijing to petition—it’s the 13th time that he has been illegally detained since 2012, he said.

In 2006, Tang’s farmland was occupied by the local Xinjiang Production and Construction Corps, a semi-military government-run economic collective. But he received no money after being evicted, and resorted to petitioning to attempt to secure justice. There is a specific government office in China for petitioners, which is supposed to receive letters, calls, and visits from people, and then deal with their concerns. In reality the system ends up achieving very little.

On the day that Tang was detained, officials told Tang that they’d arrange him to meet with leaders of the Politics and Law Commission, which runs the security apparatus, to discuss his complaint. The meeting, however, turned out to be a trap.

Tang was locked up in the black jail and tortured. The 14 people who rescued him were also petitioners once detained and persecuted at the same black jail.

“What they are doing can’t be called maintaining stability any more,” Tang said. “They kidnap you and rob you, but you can’t even resist. If you do, they accuse you of disturbing public order. If you fight back, they call you violent terrorists.”

After Tang’s escape from the black jail, it took him 10 days to get to Beijing. He said he was chased by thugs hired by the public security bureau in Xinjiang.

“Every time I was detained, the deputy director of the local petition office, He Weigan, received awards from the government. They even hired gangsters to take us back from the Beijing petition office, and the gangsters received 100,000 yuan for each captured petitioner,” Tang said.

A local petition office official once told Tang: “100,000 is nothing. We’ve got plenty of money. The law is nothing, we’ve got our own law. What can you do against us?”