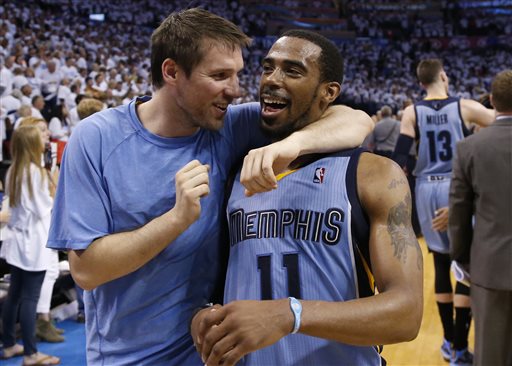 The Memphis Grizzlies look to finish off the Oklahoma City Thunder on May 1 in game 6 of the team’s first round playoff series.

The No. 7 seed Grizzlies have taken a stunning 3-2 lead over the No. 2 seed Thunder, and play tonight on their homecourt, the FedExForum.

The game will be broadcast on TNT as well as Fox Sports Tennessee and Fox Sports Oklahoma.

Live streaming will be available via TNT.

The winner of this series will face the winner of the Los Angeles Clippers-Golden State Warriors series. The Clippers are up 3-2 in that series and game 6 is later on Thursday night.

See a preview from the Associated Press below.

MEMPHIS, Tenn.—Mike Miller has a sobering story for his Grizzlies’ teammates to keep them from celebrating prematurely now that Memphis has a chance to eliminate Oklahoma City.

While with Miami, the Heat trailed the Celtics 3-2 in 2012 going into Boston — but rallied to win the game and the series.

Miller said Wednesday his message is simple: This Western Conference series is far from over. Memphis hosts Game 6 on Thursday night.

“Still a race to four,” Miller said. “We like where we are, but we have a lot of stuff we have to accomplish yet.”

The Grizzlies grabbed a 3-2 lead in this first-round series pulling out a 100-99 overtime win Tuesday night in Oklahoma City when Serge Ibaka couldn’t shoot off a rebound before time expired. Now Memphis can become only the second No. 7 seed in the NBA to take down a No. 2 seed in a best-of-seven series, joining the Spurs who beat Dallas in 2010.

That would be only the latest highlight in a drama-filled series featuring a record four consecutive overtime games. The Grizzlies have blown leads in each game that went to overtime before winning three, and they also have given up a late four-point play in three games to three different players.

“I’m getting tired of it,” Grizzlies guard Tony Allen said of all the extra work. “Hopefully, we do the things we need to do to try to avoid that, and that’s taking care of the ball down the stretch.”

The Thunder are on the brink of being eliminated in the first round for the first time since 2010 when a young Kevin Durant and Russell Westbrook lost to the Lakers. Now Oklahoma City had the NBA’s second-best record in the regular season and Durant and Westbrook both are All-Stars, yet both struggling to shoot against Memphis.

The Grizzlies have held Oklahoma City below 40 percent shooting for four straight games, the longest such streak in franchise history. Durant is averaging 28 points a game but was 10 of 24 for 26 points in Game 5. He also didn’t shoot even once during a 6-minute stretch in the fourth quarter.

“The great ones just continue to focus on the next game,” Thunder coach Scott Brooks said of Durant. “He’s a great one. He’s one of the greatest players in the world. He has to be able to continue to step up and take those shots, and he will. I have the utmost respect for his game.”

Durant has been playing more minutes every game, including all but 75 seconds Tuesday night. Westbrook had a triple-double playing 48 minutes, while Marc Gasol was on the court a team-high 46 minutes for Memphis.

Brooks is trying to rally his Thunder for a trip back to Memphis where they won Game 4 to take back home-court advantage.

“We have a great opportunity to go in there and give ourselves a chance to win,” Brooks said. “We’ve done that in every game in this series.”

Oklahoma City tried to sign Miller last summer only to lose him to Memphis, and the veteran has some unfinished business here after being on the Grizzlies’ first three playoff teams that lost an NBA-worst 12 straight. He had his best game in this series scoring 21 off the bench in Game 6, including two 3s in overtime.

The fourth overtime prompted someone to text Miller asking if the Grizzlies could make it easier for their fans.

“That wouldn’t be the Memphis Grizzlies’ style,” Miller said, “but we’ll take them however we get them.”