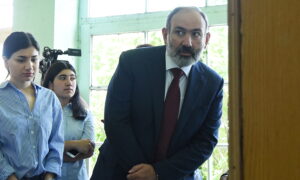 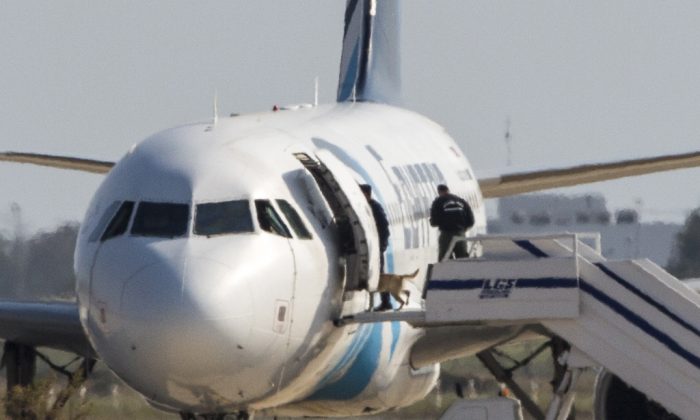 Cypriot security forces take a sniffer dog into an EgyptAir Airbus A-320 parked at the tarmac of Larnaca airport after the six-hour hijacking of the plane came to an end on March 29, 2016. (Behrouz Mehri/AFP/Getty Images)
Europe

Grinning Hostage Poses in a Photo With Hijacker Before Being Released

While a hijacker was busy holding hostages, one of them managed to pose with him for a photo before being released.

According to the Daily Mail, a 26-year-old British man identified as Ben Innes took a picture with the hijacker, 58-year-old Seif Eldin Mustafa, on March 29.

Ben Innes from #Aberdeen poses for a picture with #EgyptAir #MS181 hijacker. pic.twitter.com/ywdGYuDWwm

Innes is an internal auditor for a global oil and gas service company, according to his Linkedin profile. He was on the MS181 flight towards Cairo when the hijacker forced the plane carrying 55 passengers and 7 crew members to land in Cyprus.

According to the Daily Mail, it is believed that Innes approached Mustafa while being held hostage and then sent the photo to his roommates and other friends.

“I have no idea why he took the selfie but I imagine he probably volunteered to take it as he’s not afraid to shy away from anything,” Innes’s roommate Chris Tundogan told MailOnline.

“I find it pretty mental but that’s just Ben I guess!” He added.

Innes was one of the last three remaining hostages to get off the plane. This photo appears to show Innes running across the tarmac:

In another photo, Innes appears to put his hands up so snipers didn’t shoot at him and the two other passengers:

Seif Eldin Mustafa, who was wearing a fake explosives belt, surrendered to authorities after a standoff that lasted hours.

During the time he held the passengers captive Mustafa made erratic demands, including giving a letter to a woman, asking the Egyptian government to release female prisoners, and asking to speak with his Cypriot ex-wife.

He was taken into custody after the incident. No passengers or crew members were harmed.

From the start, it was clear that this wasn’t an act of terrorism.
— Ioannis Kasoulides, foreign minister for Cypress

Meanwhile, authorities said that they knew they were dealing with an incoherent person.

“From the start, it was clear that this wasn’t an act of terrorism, and despite the fact that the individual appeared to be dangerous in terms of his behavior, we understood that this was a psychologically unstable person,” said Cyprus’ Foreign Minister Ioannis Kasoulides.