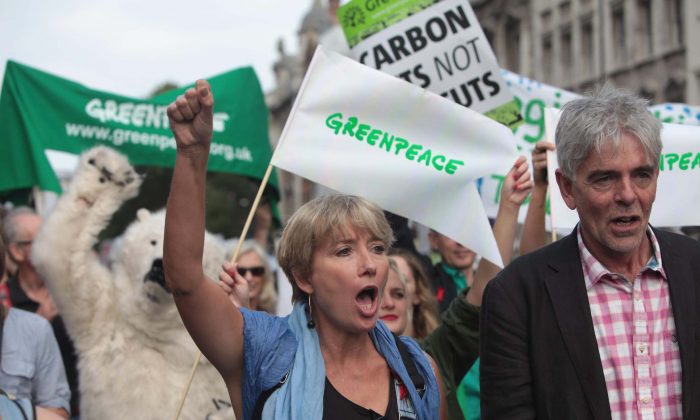 British actress Emma Thompson (C) and John Sauven from Greenpeace join an estimated 40,000 thousand people marching from the Embankment via Whitehall to the Houses of Parliament in London, Sunday, Sept. 21, 2014, as part of the People's Climate March, a worldwide mobilisation calling on world leaders to commit to urgent action on climate change and 100% clean energy. (AP Photo/Greenpeace International, John Cobb)
Environment

A leader in international environmentalism, Patrick Moore, Ph.D., said in a recent article he wrote for Heartland that he is skeptical of the well-accepted argument that global warming or climate change is being caused by humans’ use of fossil fuels.

“The idea it would be catastrophic if carbon dioxide were to increase and average global temperature were to rise a few degrees is preposterous,” says Moore.

Moore, a self-proclaimed co-founder of one of the largest environmental organizations in the world, Greenpeace, has been an environmental activist for more than 40 years. He quit Greenpeace in 1986 and currently chairs Allow Golden Rice Now—a campaign he co-founded that supports bringing genetically modified, nutritionally boosted Golden Rice into agricultural use. He also works as an environmental consultant.

Greenpeace issued a press release in October 2008 stating that Moore abruptly left in order to become a paid representative of corporate polluters. In a subsequent release issued in December 2010, Greenpeace said Moore was not one of the original founders although he did play a significant role after arriving a year into its operations.

According to Moore, the notion of climate change is actually a powerful political tool.

Characterizing the touted belief in the cause of climate change as a “doomsday scenario,” Moore doesn’t believe the global climate can be predicted with what he calls “a computer model.” Rather, he believes that the Earth has been warming gradually for 300 years. He states that it has been warming since the end of the Little Ice Age ended, “long before fossil fuels revolutionized civilization.”

He exasperatingly criticized the Intergovernmental Panel on Climate Change (IPCC) for its repeated goal of zero carbon emissions, stating that, “Effectively this means either reducing the population to zero, or going back 10,000 years before humans began clearing forests for agriculture.”

But The Union of Concerned Scientists, a nonprofit science advocacy organization founded in 1969 with the mission to build a healthier planet through science, says humans are overloading the atmosphere with carbon dioxides. It attributes the increased carbons to “the fossil fuels we burn for energy—coal, natural gas, and oil—plus the loss of forests due to deforestation, especially in the tropics,” states its website.

It further states that there is no debate within the scientific community because the majority of scientists agree that human activities are causing global warming.

According to Moore, the notion of climate change is actually a powerful political tool used to invoke universal fear and guilt in the masses by telling them the Earth is doomed. It also benefits key elites and helps to “redistribute wealth from industrial countries to the developing world and the U.N. bureaucracy.”

There has been no significant warming for 18 years while we have emitted 25 per cent of all the carbon dioxide ever emitted.
— Patrick Moore

Moore emphatically states in his March 20 Heartland article that there is no proof increased carbon dioxide has caused the Earth’s warming over 300 years.

“There has been no significant warming for 18 years while we have emitted 25 percent of all the carbon dioxide ever emitted,” he said.

NASA’s climate website, Global Climate Change, which is based on a program that conducts research on climate science, states that 10 of the Earth’s warmest years occurred in the last 12 years even though in the 2000s there was a solar output decline. This caused “an unusually deep solar minimum in 2007-2009, [but] surface temperatures continue to increase.”

“The current warming trend is of particular significance because most of it is very likely human-induced and proceeding at a rate that is unprecedented in the past 1,300 years,” it states.

Moore’s recent attack on climate change should not come as much of a surprise since he expressed similar sentiments in the movie “The Great Global Warming Swindle.”

The movie, created in March 2007, presented a series of senior climate scientists, primarily from the U.K., who set out to debunk the manmade global warming theory.

What it all boils down to, according to Moore, is political activists becoming significantly influential at a global level and he thinks all of the politicians are aware of that.

“Whether you’re on the left, middle, or the right you have to pay homage to the environment,” he said in the movie.