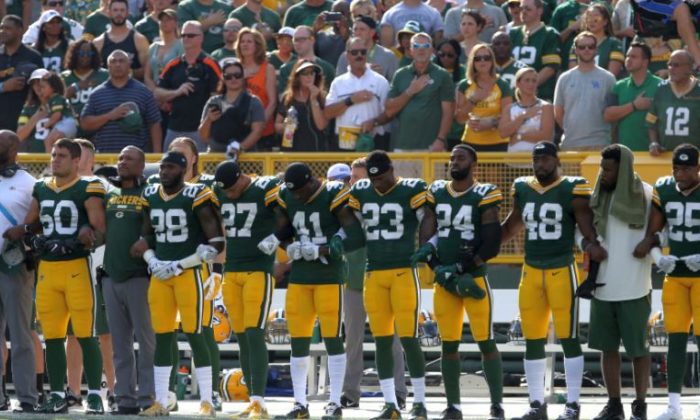 Members of the Green Bay Packers stand with arms locked as a sign of unity during the national anthem prior to their game against the Cincinnati Bengals at Lambeau Field on Sept. 24, 2017, in Green Bay, Wis. (Dylan Buell/Getty Images)
Entertainment News

Before “Thursday Night Football” on Sept. 28 against the Chicago Bears, the team will lock arms during the national anthem in a “moment of unification,” according to a statement released by the team. The Packers will be playing at home in Wisconsin.

“It will represent a coming together of players who want the same things that all of us do—freedom, equality, tolerance, understanding, and justice for those who have been unjustly treated, discriminated against, or otherwise treated unfairly,” the statement says.

“You will see the sons of police officers, kids who grew up in military families, people who have themselves experienced injustice and discrimination firsthand, and an array of others all linking together in a display of unity,” it added.

Rodgers said Tuesday, Sept. 26, that the Packers support the military and others in uniform, according to The Associated Press.

The actions are about “unity and love … and starting a conversation around something that may be a little bit uncomfortable for people,” he said.

The Packers linked arms during the anthem during their last game. Several players sat on the bench.

The anthem protests were triggered after President Donald Trump over the weekend suggested that any player who sits or takes a knee should be fired.

“Ratings for NFL football are way down except before game starts, when people tune in to see whether or not our country will be disrespected!” he tweeted on Sept. 26.

The NFL has all sorts of rules and regulations. The only way out for them is to set a rule that you can't kneel during our National Anthem!

Around 200 NFL players protested in some way as the national anthem was sung.

Former San Francisco 49ers quarterback Colin Kaepernick ushered in the protests in 2016, and a few players followed suit last year. Kaepernick and other players have claimed they’re protesting police brutality in the wake of prominent officer-involved shootings around the United States and perceived racial injustice.

Sunday’s protests were the largest of their kind.