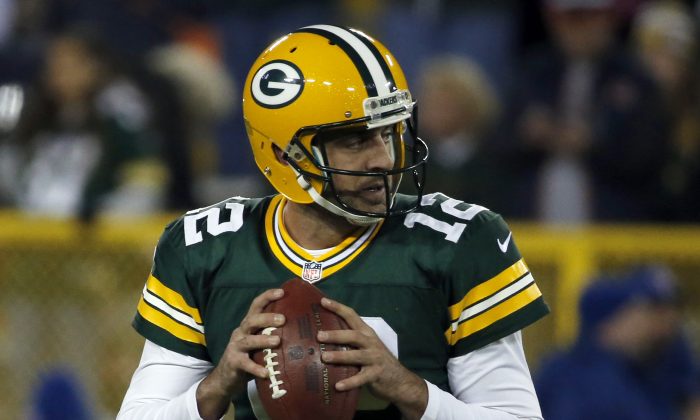 Following the Packers crushing victory over the Eagles, Green Bay is looking like one of the best teams in the NFL. Here’s some of the latest buzz:

Aaron Rodgers is continuing to make history while playing at home.

He’s up to 29 touchdown passes against no interceptions in his last 322 pass attempts while at Lambeau Field. It surpasses Patriots QB Tom Brady’s streak at home of 288 between 2002 and 2004.

Eagles coach Chip Kelly said after the 53-20 loss, “He is an extremely accurate passer. We knew that was the deal coming in and we didn’t do a good enough job getting after him. He was as advertised.”

“I think he is playing as good as anybody in the league. You look at some of the balls he throws: Extremely accurate, on target. If you blitzed him, he got it out quick. If you didn’t, he held it until guys got open. He got it to everybody.”

Safety Micah Hyde is emerging as the latest playmaker for the Packers.

“A week after his first professional interception, the safety returned a punt 75-yards for a touchdown in the first quarter Sunday that helped blow open the Packers’ 53-20 victory over the Philadelphia Eagles at Lambeau Field,” as ESPN notes.

Hyde spoke of the punt return, which essentially broke the Eagle’s in the first half.

“In the locker room at halftime, House said, ‘I knew you weren’t going to fair catch it,'” Hyde told the network. “I have trust in him and whoever the other jammer is and the guys up front to block and get their guys.”

His brother said that Clay–typically an OLB–isn’t happy playing inside linebacker.

He was asked about it before the Eagles game and said there’s not “much truth” to his brother’s comments.

“I don’t think there’s a position I couldn’t play on this field. If I had the proper training and time to get ready, I think (anything’s possible). I might be better at certain positions, but I think I’d have a good (shot) at starting at least one game at certain positions before getting yanked,” he told USA Today.

He added: “When Coach Mike (McCarthy) presented the proposition of playing in the middle, I said, ‘Sure,’ because I had done it before and I didn’t think much of it. Now, to the extent that I’ve played it, as far as the learning curve, I’ve really had to be a student of the game and had a crash course in being an inside linebacker for this past week and a half.”

Nelson says Rodgers at his peak

“We probably think that — I don’t know about everyone else,” he said, via NFL.com. “But we’re out there having fun, doing our job, making plays and, most importantly, winning ball games.”

“I mean, if you look at last week with what we were able to do in the first half, I don’t think he can play better. It’s still hard, I think, over a course of a season to match what we did a few years ago when we went 15-1 and our offense was putting up unbelievable numbers,” he said after the Packers demolished the Chicago Bears.

“But I think the main thing now is just to stay consistent in what we’re doing. I think we got too much up and down, and I think we’ve got a great opportunity Sunday to go out and do it against a quality opponent and truly see where we’re at.”