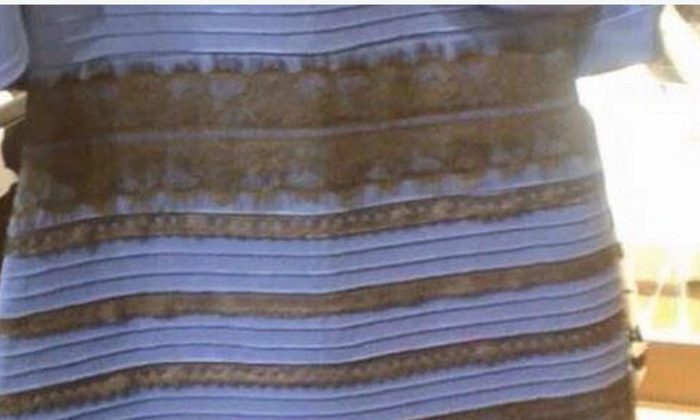 A dress being shared on social media sites has prompted an intense debate: Is it black and blue or white and gold? (Screenshot)
Social Media

Green and White or Red Also? The Dress Debate Heats Up

Some people apparently think the dress that’s gone viral is actually green and white or even red, according to social media accounts.

@TrampMannJay the dress has taken over people’s minds !!!! Blue gold black white NO ITS RED AND GREEN EVERYONE

Showed mama the dress and her response was “it’s white and green.” There you have it folks. #TheDress

We have all types of dresses blue and black, white and gold, pink, yellow, red, and even green!

Everyone is talking about a dress being blue and black vs white and gold. They’re all wrong, it’s reg and green!!

But the dress is currently beating the Internet “black and blue” or maybe it should be gold and white?

Friends and co-workers worldwide are debating the true hues of a royal blue dress with black lace that, to many an eye, transforms in one photograph into gold and white. Optometry experts are calling the photo a one-in-a-million shot that perfectly captures how people’s brains perceive color and process contrast in dramatically different ways.

“This photo provides the best test I’ve ever seen for how the process of color correction works in the brain,'” said Daniel Hardiman-McCartney, the clinical adviser to Britain’s College of Optometrists. “I’ve never seen a photo like before where so many people look at the same photo and see two sets of such dramatically different colors.”

The photo, taken earlier this month before a wedding on the remote Scottish island of Colonsay, also illustrates the dynamics of a perfect social-media storm. Guests at the wedding could not understand why, in one photo of the dress being worn by the mother of the bride, the clearly blue and black-striped garment transformed into gold and white. But only in that single photo, and only for around half of the viewers.