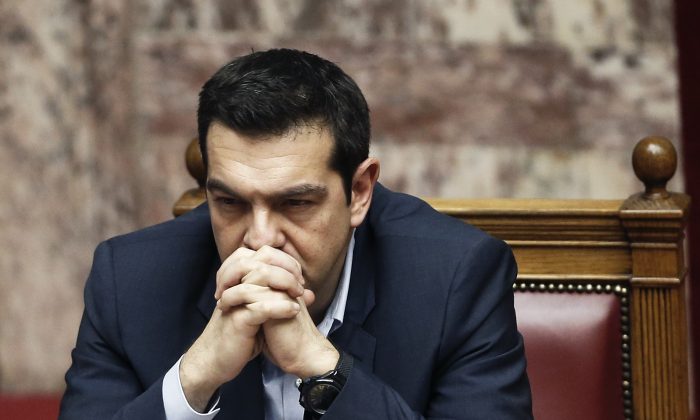 ATHENS, Greece— Greek Prime Minister Alexis Tsipras is set to address an emergency session of Parliament later Friday over the country’s struggles to get a deal with creditors, a day after his government opted to delay loan repayments to the International Monetary Fund — a gambit that has rattled markets all around the world.

The decision Thursday by the Greek government to bundle together its four payments totaling 1.6 billion euros ($1.8 billion) due to the International Monetary Fund this month into one on June 30 raised fears across markets that the country’s financial position is even worse thought, threatening its place in the euro. It’s the first time a developed economy has taken the option of bundling payments together — an emergency maneuver that’s allowed by the IMF but taken up last by Zambia in the 1980s.

The Stoxx 50 index of leading European shares was down 1.3 percent while the main stock market in Athens fell 3 percent. Greece’s borrowing costs also shot up with the interest rate on the country’s two-year bonds standing at a heady 24.5 percent.

“The probability of an eventual debt default has clearly risen, which could set off a process that includes capital controls to prevent meltdown in the Greek banking system,” said Neil MacKinnon, global macro strategist at VTB Capital.

The Greek government, which is dominated by the radical left Syriza party, was elected in January on a promise to end hated austerity measures that it blames for many of Greece’s woes. Since Athens started relying on bailout cash from its international creditors in 2010, the country has had to enact a series of unpopular austerity measures, such as spending cuts and tax increases — measures that have contributed to a 25 percent contraction in the Greek economy and a sharp increase in unemployment and poverty rates.

In its discussions with creditors over the release of the 7.2 billion euros remaining from its 240 billion-euro bailout fund, the Greek government has sought to get rid, or at least minimize, the scale of those austerity measures on Greece.

That’s led to an impasse over the past few months. Greece has relied on its own resources since last year to pay upcoming debts. Without the bailout cash, few think Greece will be able to pay the IMF back at the end of the month.

An opinion poll on Friday suggested public support for the government’s tough negotiating position is slipping. The Alco survey for news website Newsit found 47 percent disagreed with the way the government was handling negotiations, while 39 percent agreed. The June 3-4 telephone survey of 1,000 respondents also found that a clear majority of Greeks still backed remaining in the euro. Only 18 percent of those polled preferred a return to a national currency, with 74 percent backing the euro.

Tsipras is set to address an emergency session of parliament later amid growing discontent within his left-wing Syriza party over demands for new austerity measures from bailout lenders.

“The problem now is political,” said Megan Greene, chief economist at Manulife Asset Management. “Syriza (lawmakers) seem outraged by the creditor’s proposed program, based on their public comments, which suggests Tsipras will have a very difficult time selling this reform program to his party,”

“The government will not go back on the promises we made to the Greek people. Let the Europeans assume the responsibility if there is a split with lenders,” Health Minister Panagiotis Kourouplis told Antenna television.