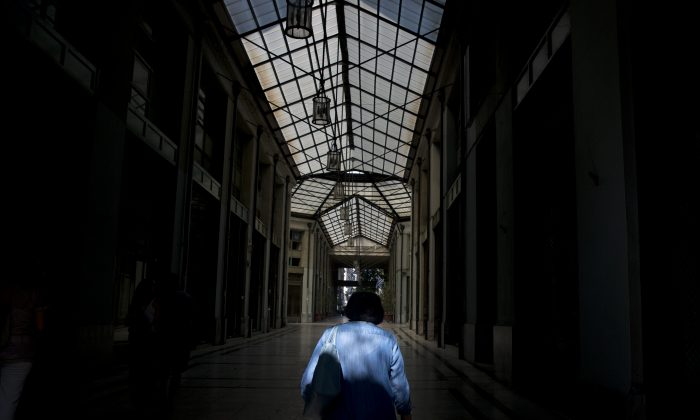 ATHENS, Greece—Dimitris Bokas keeps meticulous records of the bathroom fixtures he sells from his small shop in the quiet middle-class residential neighborhood of Koukaki near the center of Athens — just in case a tax inspector makes a surprise visit to ensure Greece’s 23 percent sales tax is being collected and reported correctly.

But Bokas also does installation and repair jobs — and half of those involve cash deals with no receipts for his labor. The result is that a job costing 250 euros ($275) goes for 125 euros because he doesn’t charge the client sales tax and Bokas doesn’t report the income for taxation. “I’ve got a receipt for everything I sell in my shop,” Bokas said. But tax officials “don’t know what my hands do.”

This kind of tax dodging is a Greek national pastime, costing the state billions of euros in revenue. Greece promised last week to get tough on tax evasion in return for a third European bailout expected to be negotiated over the next month. The talks, expected to last four weeks, will start if Parliament agrees by Wednesday to eurozone demands including tax hikes and pension cuts.

But experts say Greece has largely failed in previous crackdowns on tax evasion, which has been rampant for generations. An estimated 10 billion euros in taxes never makes it into government coffers annually — a significant factor in the country’s inability to pay its roughly 320 billion euros in national debt.

Tax dodging among Greeks started as a sign of patriotism during nearly four centuries of Ottoman rule that ended in 1821. It continues today amid mistrust over government spending and disdain over how the country’s various administrations have handled Greece’s financial mess after the economy imploded in 2009.

“A lot of Greeks believe it’s not only a way to cheat the inefficient Greek government, but a way to exert small time resistance to the bailout agreement and tax hikes,” said Aristidis Hatzis, a professor of law and economics at Athens University. “They do not perceive this as a kind of corruption.”

Contributing to the problem is an informal economy that accounts for about 25 percent of Greece’s annual gross domestic product. Evasion is most common in the services sector where customers don’t receive a physical product, and it’s not limited to small businesses like plumbers and restaurants.

Many cases involve unreported income of hundreds of thousands of euros or more and one lawyer failed to report 16 million euros in income, the unit said in a statement last week.

But many cases go uninvestigated because of poorly trained tax investigators, personnel shortages and politically motivated appointments of tax investigation supervisors, said Haris Theoharis, who was Greece’s top tax enforcer until last year and is now a lawmaker with the centrist To Potami party.

Theoharis said it’s too soon to tell whether the governing far left Syriza party will mount an effective campaign against tax evasion because few specifics of its plans have been disclosed. He argued that freeing the system from political interference is key: “Unless they depoliticize the tax administration and stop trying to interfere with who gets promoted,” he said, “they will not have success.”

Nikolaos Artavanis, a finance professor at the University of Massachusetts at Amherst, said the government’s decision to raise the sales tax for restaurants as part of its offer in return for a bailout could prevent a tax evasion crackdown from working.

The rate is going from 6.5 percent to 13 percent for hotels and from 13 percent to 23 percent for restaurants and other businesses that sell food. Many Greek restaurant and hotel owners say they’ll be forced to absorb the hike because their clients can’t afford to pay more, and experts like Artavanis believe evasion could skyrocket.

“The fiscal impact could be zero or be negative because tax evasion will increase,” he said. “They could get less in taxes.”

More enforcement will be needed, but Artavanis said many parts of Greece rarely see a tax inspector. His research focuses on tax payments by Greek restaurants, and owners in some parts of the country have told him they have not had tax inspector visits since last August.

Bokas, the plumber and fixture vendor, said most of his customers who want no-tax jobs are apartment owners or small businesses. Larger businesses and big apartment buildings with on-site management always want a receipt for the work so they pay the full price, and Bokas collects the sales tax and pays tax on the work he does for those jobs.

He said would prefer to do all of his work legally but doubted there will be much change in Greece unless the entire country changes its habits. Unlike Greeks who distrust the government’s ability to effectively spend tax money, Bokas thinks officials should be given a chance to prove they can.

“Paying all the taxes we owe would be the right thing to do and it would help us have a healthier country,” he said. “If the tax were paid, the rich wouldn’t be able to get richer by evading taxes and the poor wouldn’t have to evade taxes so they can just get by.”